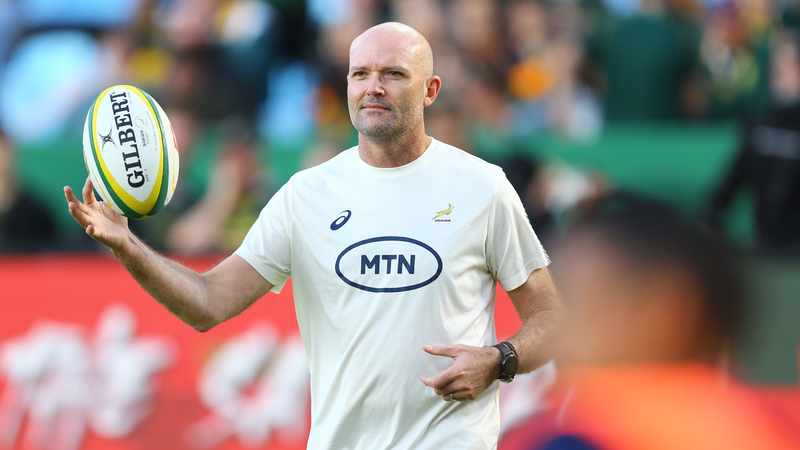 Bloemfontein – Jacques Nienaber insists that the Springbok team will never be a platform for experimentation or development, and that the team he has selected to play Wales on Saturday in Bloemfontein is a winning combination.

Nienaber has come under fire in some quarters for overhauling the team that beat Wales in last week’s first Test for this weekend’s second Test in Bloemfontein, but he says he would never compromise the Boks’ ability to win matches.

“We would never pick a team we thought would lose,” Nienaber stressed. “The Springboks are not a platform for development, we are about performance. It is going to be tough, Wales did not come here to make up the numbers … they came to win the series. Their backs are against the wall, they want to make it 1-1- and then go to Cape Town for a decider.

“And we have picked a team of hungry players that will play for their lives, just as Wales are going to do.”

Nienaber said that in a pre- Cup year, it is the norm for leading countries to grow their depth while at the same time keeping winning momentum.

“Nobody is complaining that France have sent a team to Japan that are without a number of their star players, and they won well last week,” Nienaber pointed out.

A closer look at Nienaber’s team shows a team of form players from the United Rugby Championship,

From Warwick Gelant at No 15 all the way to Trevor Nyakane at tighthead prop, there are in-form players. At centre, Andre Esterhuizen is primed to explode after being voted the best player in England while wings Kurt-Lee Arendse and Aphelele Fassi ooze class.

And then the loose trio is something of beauty. At No 8 is the URC player of the tournament in Evan Roos, on one flank is the 2019

Player of the Year in Pieter-Steph du Toit and on the other is revered warhorse Marcell Coetzee.

That is a combination made in rugby heaven and is potentially much better than last week’s trio of Jasper Wiese, Siya Kolisi and Franco Mostert.

“It is a very exciting loose trio,” Nienaber agreed. “Pieter-Steph and Marcell are very experienced and you will have them calming the nerves, and the form player from the URC in Evan will be feeding off them, and then you have another player in great form in Deon (Fourie) coming on to add something extra. So, yes, this is a very exciting loose trio and I think you will find just as exciting combinations throughout the team.”

The second row is hardly shabby either, with Marvie Orie partnering Eben Etzebeth who will be playing his 99th Test match.

Speaking of Etzebeth, Nienaber joked that anyone casting aspersions on the quality of this latest Bok team would have to answer to Etzebeth.

“I’m not one to take offence easily but if you say this is a ‘B’ team, Eben will take offence, so will Handre (Pollard, captain this week), Jesse (Kriel) and Thomas (du Toit) and so will all the other guys in the team because this is a match-23 picked to beat Wales,” he said.

Nienaber underlined his belief in the team he announced by pointing out that he has given the newcomers a chance while the series is still very much alive.

“Our biggest strategic objective as Springboks is to win, and we picked a side to do that.

“You might ask, why not wrap up the series with the same team from the first Test and then make all the changes for the dead rubber third Test, but we want to see what these guys do under pressure because in a series against the All Blacks and in the Cup you play under constant pressure, but in a dead rubber it doesn’t matter that much if you win or lose,” Nienaber said.

“But for our guys who will play on Saturday, it will be like a final for them.

“Wales will be playing for survival in the series, and we want to see if our guys can win under pressure against a desperate Wales team,” The Bok coach concluded.