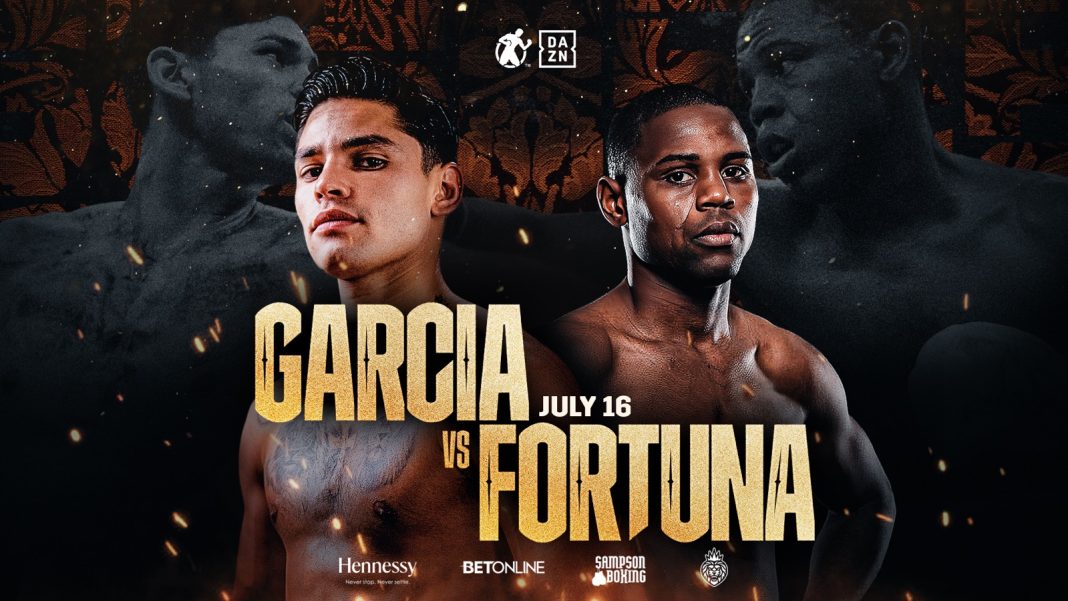 By Jim Calfa: Andy Ruiz expects big things from lightweight contender Ryan Garcia once he gets “tested” by the best fighters in the 135-lb division.

Ryan (22-0, 18 KOs) hasn’t been able to show fans what he’s got due to him still being in early stages of his career. Next week, Ryan is getting his first true test against coontender Javier Fortuna on July 16th at the Crypto Arena in Los Angeles.

This fight should let Ryan shift through the gears, and show the boxing world what he can do against a former world champion  in Fortuna (36-3-1, 25 KOs) in the main event on DAZN.

Like a lot of fighters, the 23-year-old Ryan is still working his way secondary level boxers,  and learning along the way.

“Ryan [Garcia], once he gets tested with the good guys, I think Ryan’s talent is going to show more because Ryan is hella good. I know the controversy of him and Canelo both talking s***.

“Like I said, I stay in my own lane. I don’t like to talk about anything. The gym [Eddy Reynoso] is good. It doesn’t mean I’m not going to go back or anything like that. I’ve got love for all of them.

“They never showed me any disrespect or nothing, and I’ve got love for Eddy and Canelo all the way through. I don’t know with Ryan. They’re all in their own little world. Ryan doesn’t need nobody. He has his own little team, and he has the talent,” said Ruiz about Ryan Garcia.

“I know he might say stuff, but I don’t talk s*** about nobody, bro. Even the people I don’t fight, I don’t say nothing,” said Ruiz. “I stay in my own lane and focus on me,” Ruiz said.

Ryan and Canelo Alvarez recently had words after the Mexican star criticized his work ethic when the two were sharing the same gym. It’s not a big deal.

“I think I’m better at fighting taller guys. For some reason, I get in there better. Arreola was one of the shortest guys that I fought. It’s hard fighting Mexicans because they don’t give up.

“It was a good fight,” said Ruiz about the Gervonta ‘Tank’ Davis vs. Rolando ‘Rolly’ Romero fight. “I think he should have boxed him around and let him come to him.

“He [Rolly] opens up too much, and I knew that was when he was going to counterpunch him and get him. You always got to be cautious because you got to expect something coming back, especially with these lefties.

“It’s exactly what I got to do on September 4th [against southpaw Luis Ortiz]. Be cautious and do my thing,” said Ruiz.