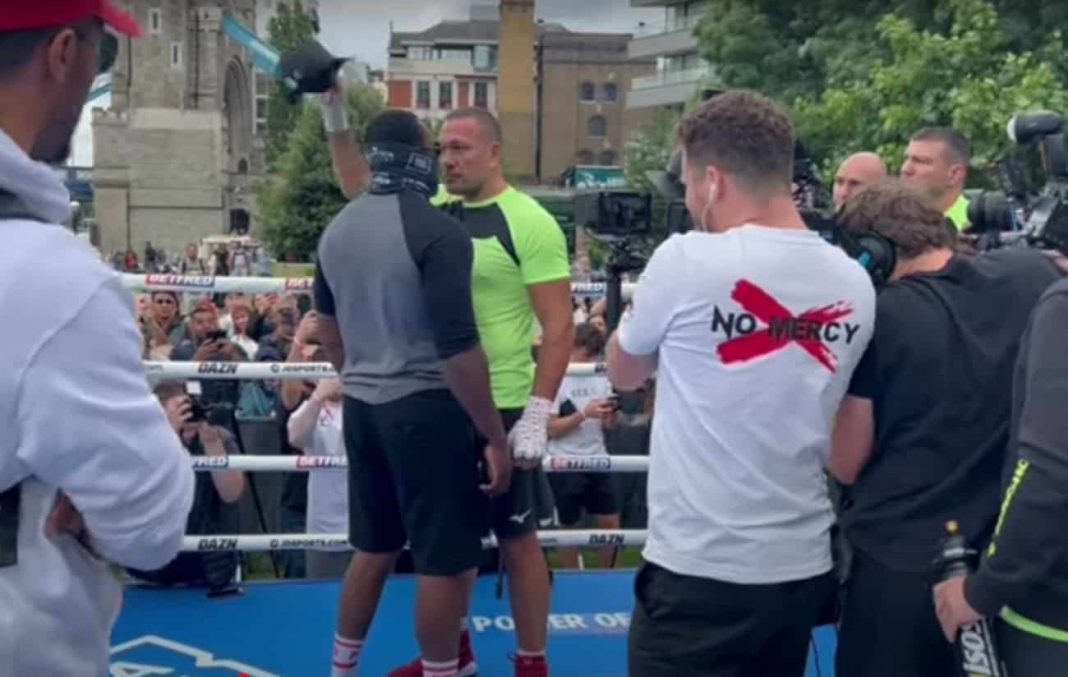 By Charles Brun: Kubrat Pulev was in bullying mode on Wednesday, snatching the hat off Derek Chisora during a public workout at the Potters Fields Park in London.

Pulev was literally DARING Chisora to do something about it when he took his cap from him. The talented Bulgarian had that look on his face that he wouldn’t have minded if they started swinging right then and there.

It was clear that Chisora didn’t want that smoke, so he let Pulev take his cap as if he were surrending his lunch money at school to a bully.

The two fought six years ago in 2016, with Pulev easily outboxing Chisora, winning a 12-round split decision. Most boxing fans would agree that Pulev deserved to win every round of the fight, as Chisora was completely out of his element against the highly skilled Bulgarian fighter.

You could tell from Pulev’s body language before the incident that he was in the mood to mess with Chisora because he had that look to him that was going to be trouble.

This is a little bit of payback for Pulev because in the final press conference before his fight with Chisora in 2016, ‘Delboy’ grabbed him by the head during their face-off and pulled him down.

It was gamesmanship by Chisora that got Pulev heated to a boil. Pulev looked like he wanted to take Chisora apart, and eventually got his chance during the fight, winning an easy 12 f round decision.

“I think we can expect a great fight. Two heavyweights desperate to win, and two heavyweights that need to win,” said Eddie Hearn to Fight Hub TV about this Saturday’s rematch between Chisora and Pulev.

“Of course, Chisora coming off a lot of defeats [x 3]. It’s easy to say he’s losing to elite heavyweight, which he is, but he’s still losing to them.

“He’s GOT to win this fight on Saturday, it’s very important, and I think it’s going to be a really tough fight against Pulev, who is very motivated. He looks in great shape. I think he’s going to be a very tough night for Derek.

“He’s up for it. It’s a must-win fight,”  said Hearn to iFL TV about Chisora absolutely needing to win on Saturday to save what’s left of his career.

“What’s always a debate with Delboy is, ‘Should he carry on or should he retire?’ I always keep saying, look at the losses he’s taking to what level of opponent.

“He’s fighting elite heavyweights all the time. Top ten, top fifteen guys, and he’s doing it again on Saturday. He’s not doing anything else.

After the [Joseph] Parker fight, I actually thought he should take one or two easy fights, but he had absolutely zero interest,” said Hearn about Chisora’s stubborn resistance to fight top-tier heavyweights.