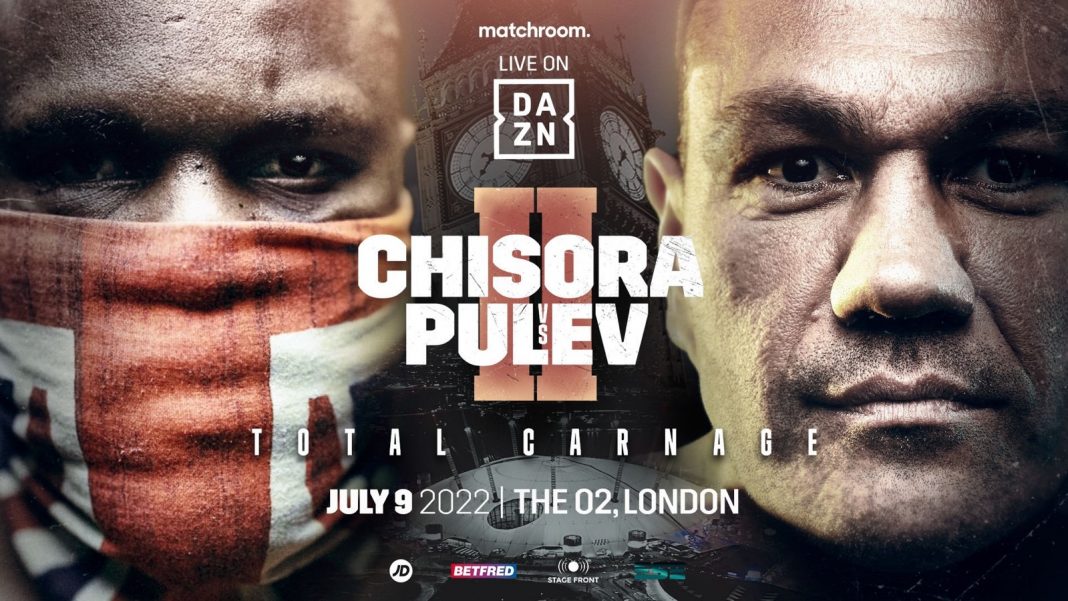 By Jack Tiernan: Derek Chisora is in a must-win situation this Saturday night in his rematch with Kubrat Pulev on DAZN at the O2 Arena in London.

Chisora has trained hard for this critical 12-round fight against the 41-year-old Pulev (29-2, 14 KOs), but it remains to be seen whether he’s got enough left to pull off a win.

We know Derek has got the power and the heart to win, but it’s his ticker that concerns this writer.

During the training clips, Chisora looked too relaxed, and you don’t see him working on his cardio, which is an area of weakness for him. That’s what he should be exclusively working on if he wants to keep from running out of fuel against Oulev.

Stamina has been a reoccurring problem for Chisora in the last three fights against Joseph Parker and Oleksander Usyk.

The former world title challenger Chisora (32-12, 23 KOs) is arguably at the last chance saloon at age 38, and this is not a fight that he can afford to lose if he wants to continue to be the main event guy on Matchroom Boxing cards on DAZN.

If Chisora wins, he can continue as a headliner for a bit longer, but that’ll depend on whether his promoter Eddie Hearn can find name fighters that the boxing public will be interested in seeing him fight.

It’s no good if they can only drag in fighters like Alen Babic, Artur Szpilka, and Carlos Takam. Fans want to see Chisora fighting top 15 ranked heavyweights, but who can he beat at this stage?

“Everyone is just one moment, and this moment has just left. I like people that work with love, with heart. I’m hungry for that fight. I’ve got a couple of years more, and I want to be a world champion.

“I have not much. Fifteen more years of fighting, maybe. Are you ready, Derek? I’m coming. It’s not long,” said Pulev.

It’s going to be a lot tougher for Pulev to get a third world title shot because his recent loss in 2020 to former IBF/WBA/WBO heavyweight champion Anthony Joshua knocked him out of the top 15 with all four of the sanctioning bodies.

“He just told me as well that his kids are coming,” said Eddie Hearn to Matchroom Boxing Twitter about Chisora bringing his children to the Pulev fight on Saturday night.

“You know that Derek is a proud man. He said, ‘I can’t lose in front of my kids.’ He’ll give it everything. The one thing about Derek Chisora is that you know when you buy a ticket or tune in on DAZN, he’s going to give every ounce of his soul,” said Hearn.