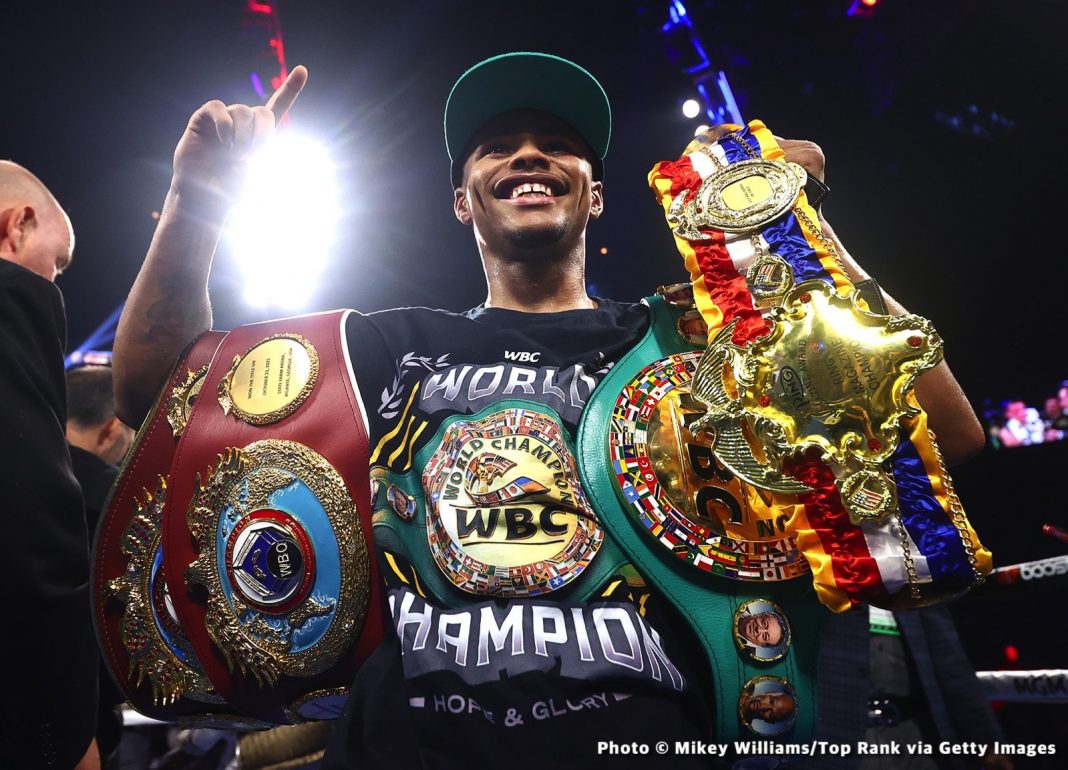 By Allan Fox: Shakur Stevenson says he rates his talent about Gervonta ‘Tank’ Davis and Canelo Alvarez.  Stevenson (18-0, 9 KOs) feels he’s got the skills advantage over those two fighters, and he believes he’s second to none in the sport.

No one would argue that Shakur is better skilled than Canelo because the Mexican star is kind of limited, and is more of a counter puncher with a low work rate.

When Canelo was younger and his hands were faster, that’s how he was able to beat a lot of guys. Unfortunately, Canelo is slowing down now at 31, and his lack of skills is being exposed. Shakur is a far more talented fighter.

Stevenson expects to move up to 135 soon, so a fight between him and WBA ‘regular’ lightweight champion Tank Davis (27-0, 25 KOs) is one that we could see happen in 2023 if he stays put.

For the time being, Shakur going to stay at super featherweight to try and capture the last two titles to become the undisputed champion.

“I seen Tank from a kid, trenches Tank, Baltimore Tank. I seen Tank from nothing,” said Shakur Stevenson to Showtime Boxing. “I would love to get in the ring with them [Tank and Devin Haney].

“I just feel I’m a skillful fighter,” said Shakur when asked to comment on a recent interview in which he said, “I’m more skillful than Tank. He may not like me saying it but it’s the truth.”

“Tank is a skillful fighter, but in his fights, he will have it competitive until he can land his shot. But what I will say about the Rolly fight, it was smart with the way he played it. He was boxing and then reeled him into a big shot.

“Tank is a great fighter, but I’m confident in myself. I feel like I’m better than every fighter in the sport of boxing. You ask me about Canelo, and I’m going to tell you that I’m better than him or I’m more skillful. That’s just me.

“I’m so confident and I believe everything that I’m saying. I feel I’m the best fighter in the sport of boxing. I know what I’m capable of,” Stevenson said.

“I think it would be a good fight,” said Shakur when asked how a fight between him and Tank Davis would play out. “He would try and get inside of the height & reach that I have to try and land a big shot.

“It’s a great fight and I’m not trying to take anything away from Tank, but I’m winning against whoever. I see what you like to do best, and I take it away from you. That’s with any fighter.

“I don know how the fight would go,” Stevenson said about Gervonta. “I know he’s short, and he’s going to try and get into the reach of mine. I don’t think he can box on the outside like he do against Rolly and all those kind of dudes. It would be a great fight.

“It would come down to the boxing IQ,” said Shakur when asked how a fight between him and Devin Haney would play out. “It’s weird. You can watch us spar when we were kids. We’ve both gotten better since then.

“You could see the skills in the sparring and see how skillful we both was. That fight is going to come down to boxing IQ. He’s got the size and the reach. But that doesn’t really matter when you have someone as skilled as me.

“I know how great I am. I don’t need to get inside. I’m really sharp too. We’ll see. That’ll come down to boxing IQ,” said Shakur about a fight between him and Haney.

“I think he’s better than what they give him credit for,” said Stevenson when asked about Ryan Garcia. “The only problem that he’s got is he always has his chin in the air, and his chin stays in the air.

“I think he’s better than what people give him credit for. I think people see him on social media and think he’s only a social media boxer. But Ryan is another person; I fought him when I was 14 years old.

“He’s been around boxing for a long, long time. I remember Ryan when we were silver gloves at 9, 10-years-old. It was a little kid, Ryan. But Ryan has been boxing for years and years.

“He’s not just a media, model boxer. He can box better than people give him credit for. I put him behind Devin and Tank, and I put him behind Lomachenko too. I think he’s NOT that skillful, and that’s the real problem there,” said Shakur about Ryan Garcia.