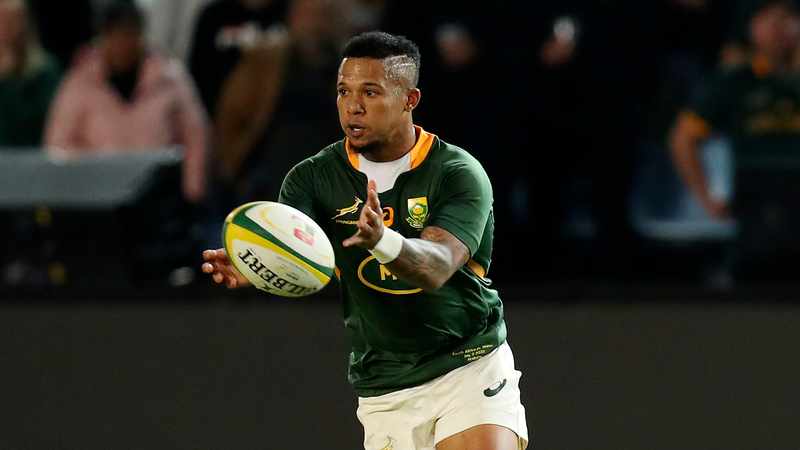 Cape Town – South Africans have a long tradition of loving to hate some of their sportsmen and currently, Elton Jantjies is top of the pops.

Boy, did social media go to town on Sunday with some entertaining memes – unless you are Jantjies, of course – and his recent performance on an overseas flight only gave the joke writers some explosive ammo.

But I am going to buck the trend and suggest that Jantjies should not be put on an Emirates Airline plane out of the Springbok camp.

Jantjies undeniably had a horror first half at Loftus Versfeld but I agree with his former coach at the Lions, Swys de Bruin, who has questioned why Jantjies was “thrown under the bus” after having played just 13 minutes of rugby all year because of a shoulder injury that required surgery.

Last week, Bok coach Jacques Nienaber explained the selection by pointing out that Handre Pollard had only arrived on the Sunday from Montpellier, while Elton had been training for three weeks with the Boks and now needed game time because “there is no pressure in training”.

With hindsight, the Bok coach would now privately admit that he didn’t realise just how undercooked Jantjies would prove to be but one issue that is on Nienaber’s shoulders is asking the 31-year-old to play a kicking game that is not natural to him.

When Jantjies was the starting flyhalf for a Lions side that made three Super Rugby finals and won 78% of their games, it was with him playing a front-foot game where he played his centres and blind-side wings over the advantage line.

Yes, he can kick but it is not in his natural DNA; rather than the long punt, he prefers the chip, kick-pass, and grubbers.

Where Jantjies has been very good for the Boks is coming on in the last 20 minutes with Pollard moving to 12. At this point, the game has loosened up and Jantjies plays his natural game. When he came on against the All Blacks last October and with a drop goal and two penalties steered the Boks to a 31-29 win, he was the hero.

That was not that long ago and ejecting him from the Bok mix because of one bad game – when he was rusty and asked to play a game unnatural to him – doesn’t make sense, particularly when the only other flyhalf in the Bok set-up is injured (Johan Goosen).

Nienaber chose not to blood Manie Libbok or even Chris Smith, and the other flyhalf options in the camp are more fullbacks than flyhalves (Willie le Roux and Damian Willemse).

The facts are that Pollard was always earmarked to start the second Test and the gamble was to start Jantjies in the first Test, while Pollard shook off the jet lag.

The gamble failed, Jantjies was jerked off at half-time and the combo of Willemse and Le Roux at No 10 for the second half saved the day, but don’t eject Jantjies altogether because of one forgettable 40 minutes.

Lest we forget, Le Roux is another who has been drowned in public vitriol but kept in the mix and at the weekend he played a match-winning role, along with Willemse.