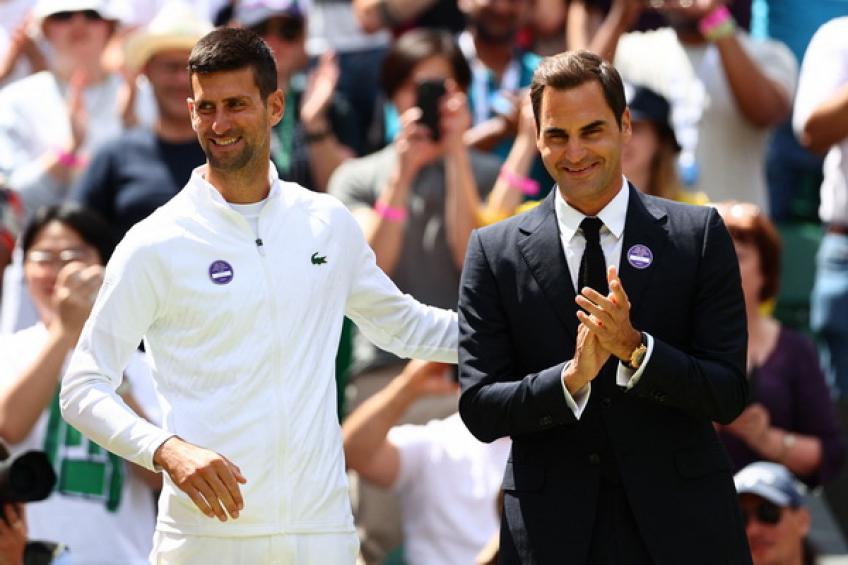 An eight-time Wimbledon champion Roger Federer walked onto his beloved Centre Court on Sunday as the last of the legends and former winners. Celebrating 100 years of Centre Court, the organizers gathered tennis legends from different eras, including Federer, Novak Djokovic, Rafael Nadal and Andy Murray.

Roger stood near Novak during the ceremony, and they talked briefly. Djokovic wished to see Federer on the court again, calling him a legend and an inspiration for many. Missing the singles Wimbledon draw for the first time since 1998, Federer was emotional during his speech, saying he would love to play at his beloved event one more time before ending his career.

Struggling with a knee injury, the Swiss has played only six tournaments and 19 matches in the past three seasons, undergoing three surgeries and still doing his best to compete again.

Roger returned to the court in March last year and showed his best tennis at Wimbledon.

The Swiss took down Adrian Mannarino, Richard Gasquet, Cameron Norrie and Lorenzo Sonego to enter the last eight as the oldest player in the Open era. Hubert Hurkacz defeated Federer 6-3, 7-6, 6-0 in the quarter-final, and we are yet to see him competing again.

Roger underwent the third knee surgery a few weeks later and missed the rest of the season and the first half of 2022. Federer has been working hard on a comeback, and he expects to play the Laver Cup and Basel before turning his focus on 2023.

“I told Roger so many people love him, that he has been greeted very nicely and needs to come back so we can play at least once more – as he said it himself. We have all seen how special it was when he entered Centre Court.

Everyone was on their feet, showing their love and respect towards him – he is a legend in every aspect. He has been one of my biggest rivals in my career, and it’s been weird not seeing him participating in tournaments.

He has been struggling with injuries for the past few years and played only a few events – as he said, it was unusual seeing him here at Wimbledon in a different role. I think it’s very important for the sport that players like him compete for as much as possible because it brings a lot of attention and benefits all of us,” Novak Djokovic said.