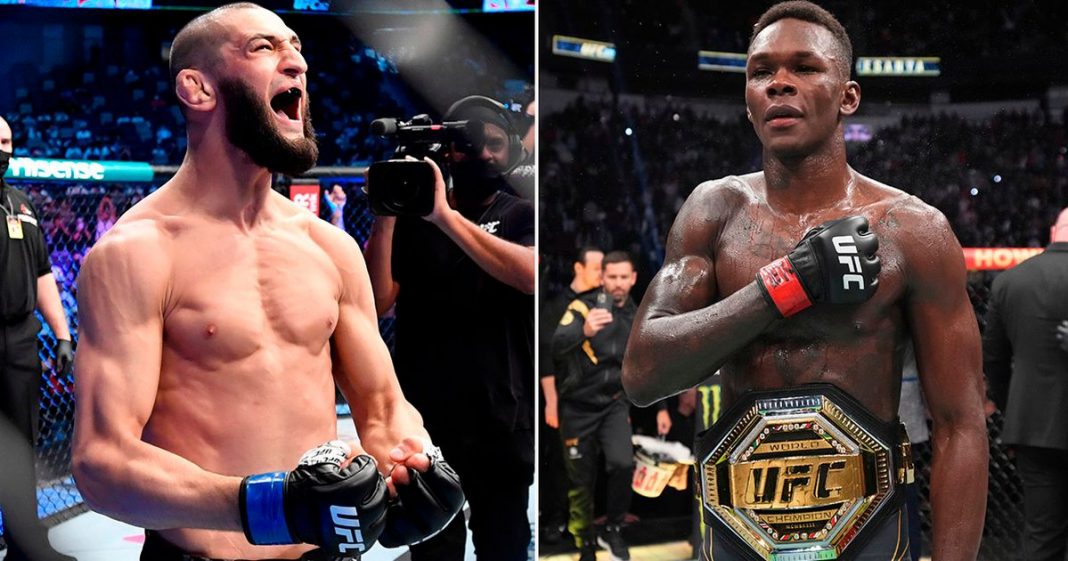 Khamzat Chimaev has doubled down on his call-out of UFC middleweight champion Israel Adesanya after his latest title defence.

Adesanya made the fifth defence of his 185lb title at UFC 276 last weekend by outpointing top contender Jared Cannonier in a one-sided fight. Fans started to get restless come the final round of the title clash with many leaving the T-Mobile Arena in Las Vegas before the final bell.

Chimaev has previously expressed his desire to become the first-ever three-weight UFC champion, having already picked up wins at welterweight and middleweight in the promotion. The Chechen is unranked at 185lb but called for a fight with Adesanya after the conclusion of UFC 276.

Adesanya has previously admitted that he isn’t targeting a fight with Chimaev yet, but he did pay attention to his win against Gilbert Burns at UFC 273 in April. “I don’t have to take him seriously till I have to take him seriously and that’s a guy that definitely I’d like to fight if he does what he says he wants to do, because guess what? He’ll bring in a lot of eyes,” Adesanya told the True Geordie.

“That’s how it all starts, those are the ones who are crazy enough to make it happen. He’s on his way, but show me something first.” here was something he did in that fight, I won’t give it away, but I was like, ‘Hmm. I like that.’ I was really impressed with. So, that’s what made me take notice of him properly. At the moment, still, it’s just barking in the wind ‘cause who’s he fought at 185? He can beat a lot of these top guys at 185, but let me see it first.”

Do you want to see Khamzat Chimaev fight Israel Adesanya next? Let us know your thoughts in the comments section below

Chimaev also called out top middleweight contender Alex Pereira after his recent win. Speaking of Pereira, who has beaten Adesanya twice in kickboxing, Chimaev wrote: “I want to fight with this guy, UFC, Dana White, let’s make it.”

Pereira moved up to No.6 in the middleweight rankings after knocking out Sean Strickland in the first round last weekend. Adesanya is insistent that Pereira will be the next challenger for his belt, despite the Brazilian having just three fights under his belt in the UFC. Adesanya said of the fight: “The first time I told you, it was an error on my part spamming the right hand and that was in kickboxing but like I said at the press conference; the next time I put you on skates, you’re going to get frozen like Elsa.”