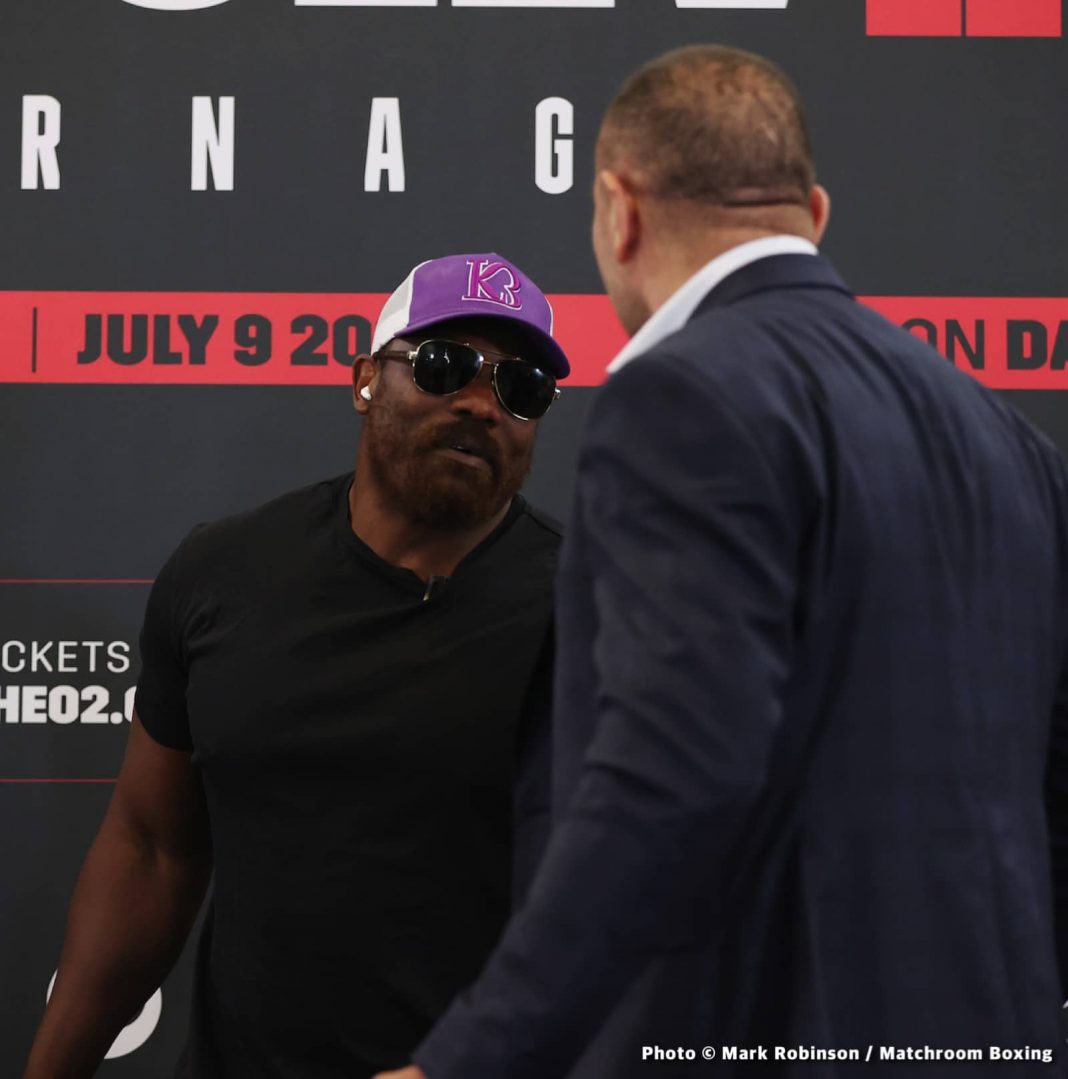 By Craig Daly: Derek ‘War’ Chisora says he has “NO” intention of retiring after his headliner fight this Saturday night against Kubrat Pulev on DAZN at the O2 Arena in London.

Chisora will be facing 41-year-old former two-time world title challenger Pulev (29-2, 14 KOs) in a 12-round fight in a card titled ‘Total Carnage.’

Pulev already beat Chisora by a 12-round split decision six years ago in 2016, and it wasn’t a close affair. Chisora was outboxed the whole way and came close to winning none of the rounds. This writer had Pulev winning 12-0.

Boxing fans would like to see the 38-year-old journeyman Chisora (32-12, 23 KOs) because he’s taking progressively worse beatings and no longer winning fights.

Chisora is stubbornly choosing to continue his career, and it might take a bad beat down from Pulev or another fringe-level heavyweight to get him to walk away.

With Eddie Hearn letting Chisora headline his Matchroom Boxing cards on DAZN, why would Derek choose to retire?

Chisora is making excellent money that the average person would die for, and he’s already a millionaire many times over despite never having won a world title or beaten anyone of note during his career.

The 15-year professional Chisora has fought in four pay-per-view bouts and lost all of them during his career.

“I enjoy it; it’s lovely. I enjoy training, I enjoy fighting, the whole promotion, that’s all,” Chisora said to DAZN. “When I don’t enjoy it, I’ll announce my retirement.”

“I’ve got the hunger. You don’t understand; I f**** love it,” said Chisora, who has lost his last three fights and hasn’t won a contest since 2019.

When the old-looking 41-year-old Pulev was asked if he’ll retire if he loses to Chisora, he said, “Maybe, but maybe I win.”

If Pulev loses to Chisora, it’s clear that he would need to retire because he’s not going to get another chance to fight for a world title, and that’s what the two-time former title-challenger is aiming for.

As bad as Chisora looked in his one-sided loss to Joseph Parker last December, it’s likely that Pulev will get the victory on Saturday night and will avert retirement.

“It’s the same, hit the bag, hit the pads, do your cardio, lift the weights, move your head, don’t go off the line,” Chisora said.

“Punches are chucked the same way; you can’t change much when you’ve been in the game for as long as me.”

“No,” Chisora said when asked if he’ll be retiring soon.

Ultimately, what will be the catalyst for Chisora retiring is when Hearn & Matchroom stop putting him in headliner spots on their cards.

When Chisora is relegated to fighting on undercards, it’s fair to say he’ll hang up the gloves because the money won’t be the same as what he’s become accustomed to getting as a headliner.