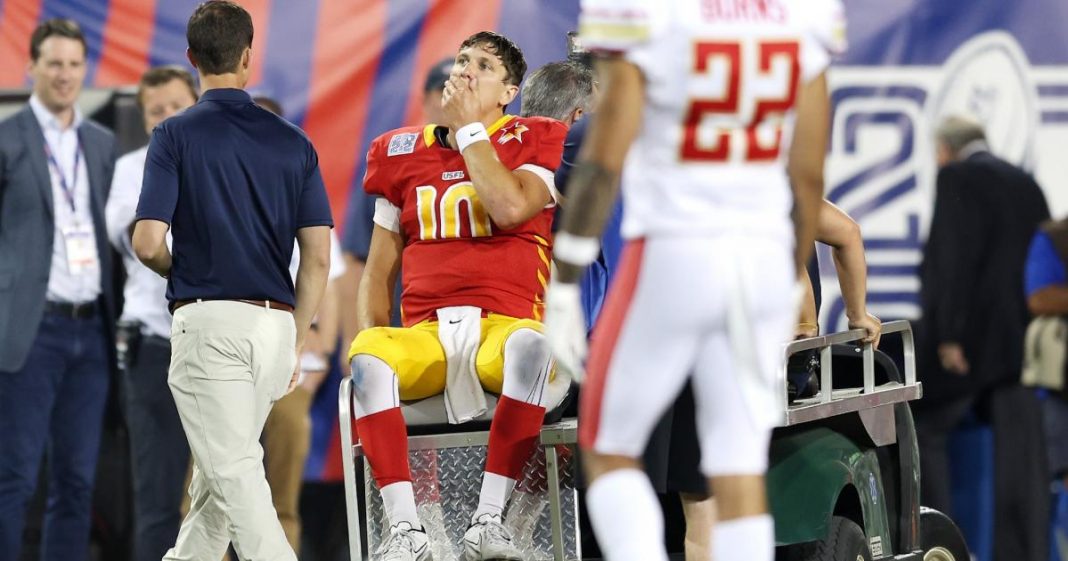 Case Cookus has been one of the USFL’s biggest stars this season. However, on the league’s biggest stage, he appeared to suffer a gruesome leg injury.

Cookus appeared destined for an opportunity at the next level as evidenced by the quality of some of the throws completed over the course of the season.

However, given the purported severity of his injury, that chance seems to be a little less likely now; at least in the immediate future.

So what is Case Cookus’ injury? And how long is he set to spend on the sideline? Sporting News has you covered.

What is Case Cookus’ injury?

Cookus went down with a gruesome ankle injury in the fourth quarter of the Stars championship game clash against the Stallions. Cookus, perhaps the league’s biggest star, received a standing ovation as her was carted off the field.

Case Cookus receives an ovation from the crowd as he’s carted off to due injury in the Championship game pic.twitter.com/agj0oTopWC

Cookus’ injury occurred when he dropped back to pass deep in the fourth quarter of Sunday’s game. Cookus was pulled down and appeared to dig his foot into the turf. Cookus’ leg ended up in an awkward position and he crumbled to the ground before being helped off the field via cart.

A deserved standing O for Case Cookus as he’s carted off the field.

We’re all thinking of you, 10. 💛pic.twitter.com/qCg11aqtdc

The injury ended up playing a bigger role in the game than Philadelphia would have hoped; KJ Costello threw a pick-six on his first throw and the Stallions raced back from a three-point deficit to capture the league title.

According to the television broadcast, Cookus suffered a broken fibula. That should make for a lengthy spell on the sidelines for the talented hurler.

How long is Case Cookus out?

With a broken fibula, Cookus appears to be headed for a long recovery.

There is a bit of a precedent for a speedy return from the injury: Buffalo Bills wide receiver Cole Beasley reportedly played through the injury during the 2021 playoffs.

However, cases like Beasley are few and far between. Most who suffer the injury, including Odell Beckham Jr. and Derek Carr, receive surgery.

Beckham, who suffered the injury back in 2017, missed 12 games as a result.

Carr may be a more comparable model for Cookus. Like the Stars QB, Carr got hurt towards the end of the season back in 2016. He was ruled out indefinitely afterwards and went under the knife just days after suffering the ailment.

However, Carr returned for the 2017 season and was named to the Pro Bowl after playing 15 games. He has steadily improved since then and it appears he has put the fibula injury behind him for the most part.

While Cookus appears headed for a lengthy absence, the lengthy offseason should put him in position to not miss too many regular season games. Perhaps Carr’s success after his fibula injury could serve as a model for Cookus going forward. NFL teams will almost certainly be following along with bated breath.