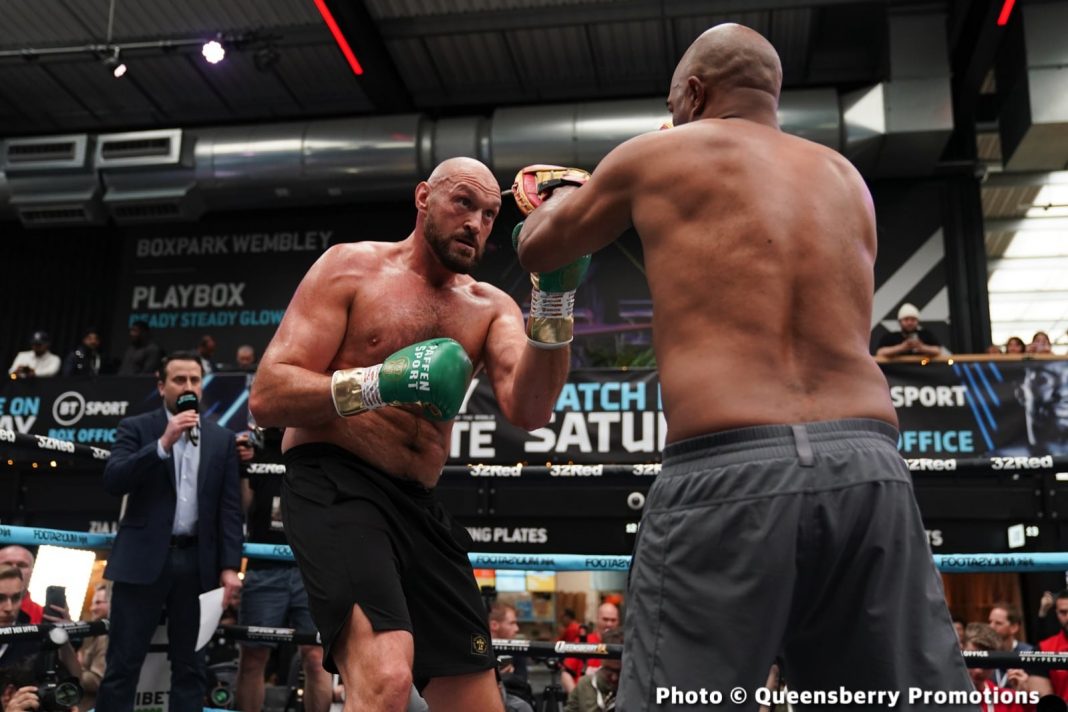 By Craig Daly: Unbeaten, highly ranked Joe Joyce wants WBC heavyweight champion Tyson Fury to defend his belt against him or vacate it if he’s genuinely retired like he says he is.

A fight between Fury and Joyce (14-0, 13 KOs) would sell well, and it would give the big 6’9″ WBC champion to fight someone with a chin, size & stamina to deal with his mauling style that he now utilizes to win his fights.

Top Rank promoter Bob Arum would leap at the chance to make a fight between Fury and Joyce, as it would bring in a lot of pay-per-view buys and give ‘The Gypsy King’ the opportunity to stay busy.

Fury (32-1-1, 23 KOs) has said repeatedly recently that he’s retired, but he still hasn’t vacated his WBC title. The Joe Joyce fight would be hard work for Fury, and it’s unclear whether he’s motivated to do that.

Joyce may be forced to wait until he becomes the mandatory for the WBC belt before he gets a shot at a world title because it doesn’t look likely that Fury will give him a title shot of his own volition.

He doesn’t seem wired like that. At this point in Fury’s career, his focus seems to be just money only.

Fury talks about fighting Francis Ngannou and strongman ‘Thor’ Hafþór Júlíus Björnsson. It’s clear from what Fury is saying that he only wants fights that will bring him a lot of money, and he’s done with facing contenders.

If Fury does return to the ring, it’ll likely be for big money against the Joshua vs. Usyk winner or in an exhibition match against ‘Thor’ or Ngannou.

Joyce looked good last Saturday night taking out journeyman Christian Hammer (27-10, 17 KOs) by a fourth-round knockout at Wembley Arena in London. That was the 36-year-old Joyce’s first fight since his win over journeyman Carlos Takam in July 2021.

“That would be a great fight to have a match with either one of them, preferably the winner,” said Joe Joyce to Secondsout when asked if he would like to fight the Anthony Joshua vs. Tyson Fury winner.

“Let’s see what happens. I’m there, ready and willing to fight anybody because I’m at the top of the division now. It’s just a matter of time before I become the heavyweight champion of the world.

“I’ve had difficult pitfalls in my career and meanders in my journey, but I keep moving forward, and I will get there. I’d love that fight if he’s going to come out of retirement.

“Obviously, he’s going to wait and watch the AJ-Usyk, but I’m not putting words into his mouth. He can do whatever he wants. If he’s truly retired, then he can vacate his [WBC] belt, and I’ll capture them, thank you.

“All those three top names [Anthony Joshua, Tyson Fury, and Oleksandr Usyk] are all a difficult night’s work, especially Fury. Standing in the ring with him will be a tough, tough old fight, but I’m excited for it,” said Joyce.