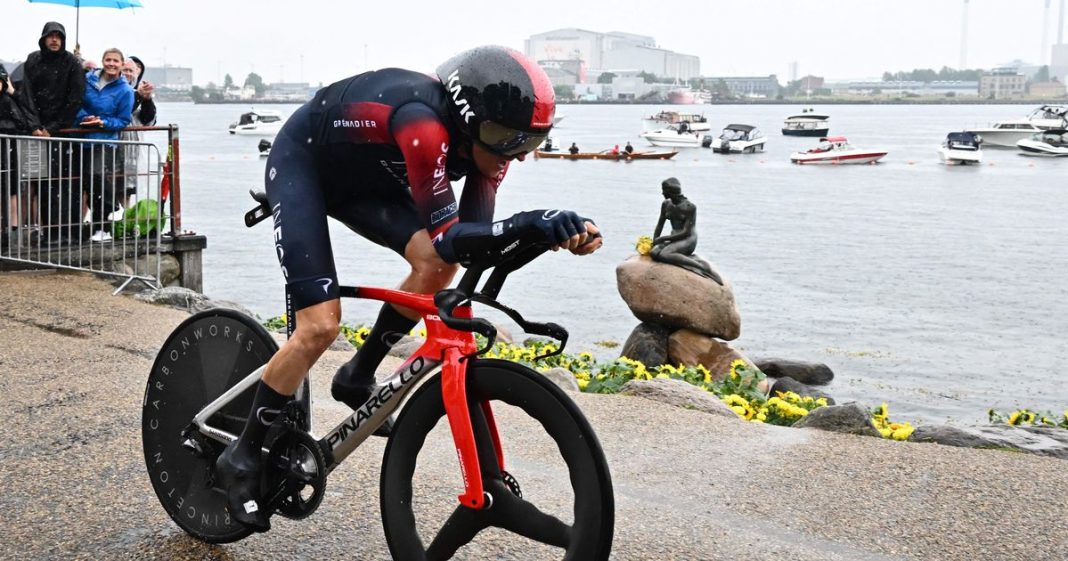 Battered by strong crosswinds but otherwise unscathed, Thomas escaped a massive pile-up inside the last mile-and-a-half after the Tour de France peloton crossed the Great Belt Bridge into southern Denmark.

The carnage included Thomas’s Ineos Grenadiers team-mates Dani Martinez and Filippo Ganna, although it had no bearing on the bunch sprint which followed. In a reduced front group, Fabio Jakobsen – whose blistering form denied Britain’s Mark Cavendish potentially record-breaking encore on Le Tour – won stage two in a breathless finish after the 125-mile long haul from Roskilde to Nyborg.

But Ineos were still smarting from the 2018 Yellow Jersey winner’s gaffe at Friday’s prologue in rainy Copenhagen, where Thomas forgot to remove his thermal body-warmer before tackling the 8.2-mile course. In his podcast Watts Occurring, Thomas relived the time trial drama with road captain and fellow Welshman Luke Rowe, who revealed team-mates on the Ineos battle bus were astonished by what they saw on TV.

Rowe said: “We’re in a team that spends hundreds of thousands, perhaps millions, on aerodynamics. And on the biggest stage, the biggest race, Geraint goes to the start line a bit chilly, so he sticks his nice warm gilet on. Not the most aerodynamic bit of kit, but you were nice and warm, weren’t you?”

I’ll get me coat: Thomas riding in his gilet
(
ANNE-CHRISTINE POUJOULAT/AFP via Getty Images)

Thomas, who had promised to go “full gas” against the clock in Copenhagen, simply did not realise he was still wearing his life jacket – and nor did the staff helping him up the ramp. “Neither of them noticed, either,” said the double Olympic gold medallist. “It’s not their fault – I should have known I had a f****** gilet on.

“After a while I was like, ‘Ah s***, I’ve still got this thermal gilet on. I was half tempted to take it off. Everyone was saying take it easy, but it just got in my head and I rode so slow around those corners. It was so bad.

“I was 18 seconds down at the first time check and I was like, ‘F*** this’ and I took the pin out and raced as I normally would. The legs were really good, which makes it worse because I could have been right up there. It’s a bit raw at the minute, I’m still a bit angry.”

Fighting back: Thomas says he “took the pin out”
(
Tim de Waele/Getty Images)

Rowe replied: “We were on the bus watching and it didn’t show you coming off the ramp. Then Brad (Wiggins) on the (in-race TV) motorbike said, ‘I’m here with Geraint Thomas, he’s actually wearing a body-warmer, which must be a sign he’s not going full gas today’ and we were like, hang on – you what?”

Thomas joked: “I’m making out like it was a mistake, but I’m also a lot faster when I’m wearing that. For stage 20 (another time trial), everyone’s going to have gilets on.”

Join the debate! Who will win the Tour de France? Let us know your prediction in the comments section.

At £28.95 a crossing, the Great Belt Bridge makes the old Severn Bridge toll look like pocket money. But after a largely benign stage, there was a sting in the tale. Jakobsen justified his place in the QuickStep Alpha-Vinyl squad ahead of Cavendish, and Wout Van Aert took over the leader’s Yellow Jersey because of bonus seconds for finishing second in the bunch sprint.

Thomas, whose Tour de France record is littered with crashes, was just grateful to escape the piled-up this time. He said: “I saw it in the corner of my eye. I saw a big black and blue thing hitting the deck and I thought ‘S***, that’s Ganna’ – unfortunately it was. Hopefully they are all right.”