Five lessons we learnt from Springbok win over Wales 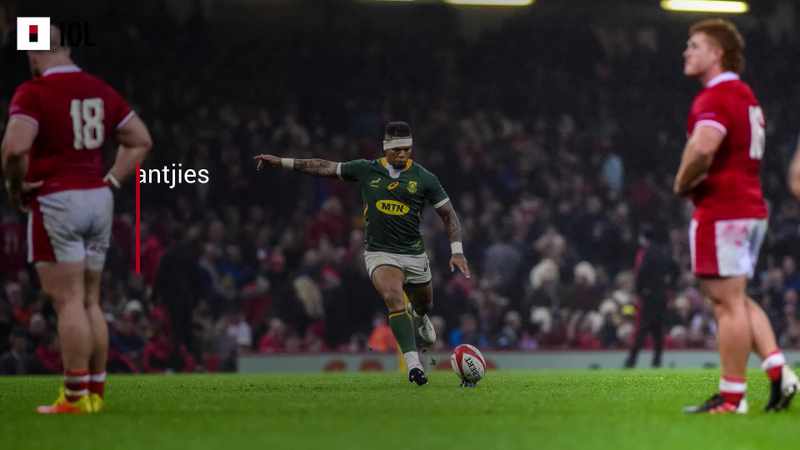 Johannesburg – The first Test between the Springboks and Wales was a nail-biter.

For Bok fans it was uncomfortably close and a reminder that Wales will not be merely pushovers in the coming matches, while the visitors will rue their lack of discipline and costly errors that ultimately terminated their chance to claim a historic victory.

Here Sport looks at five lessons we learnt from the encounter at Loftus Versfeld on Saturday.

Fullback Willie le Roux gets a lot of flak from the SA rugby supporter’s base; and while constructive criticism is fair, the vitriol around the 32-year-old often borders on hysterical.

Over the last few months there have been numerous calls to drop Le Roux, but on Saturday, he was one of the reasons the Boks managed to pull off a gripping 32-19 victory. In a crucial tactical switch, the out of sorts Elton Jantjies was hoicked off the field; Damian Willmese moving from full-back into the No 10 channel and Le Roux taking up his rightful place at No 15.

Proving the old adage that form is temporary but class is permanent, Le Roux brough calmness and maturity to proceedings. He took on the first receiver role as required, while marshaling the backline from the back with aplomb with a noteworthy rear-guard performance.

It goes without saying, he still has much to give SA rugby.

4 Did Wales crack, or did the Boks show up?

At half-time, the Welsh were in firm control of the Test, leading 18-3. They had shocked the 52 000 strong crowd into silence and the Boks looked all at sea.

It was arguably the Bos worst first half performance under head coach Jacques Nienaber, while Wales – led by Dan Biggar – were superb in their gameplan and execution. Many will argue that the Boks did not deserve the victory, but then sometimes you have to win ugly to learn important lessons.

As intense as the Welsh were in the first half, they were equally guilty of losing control in the second, becoming more niggly as the match went on.

Make no mistake, the Boks came back hard at them in the second half to score four tries and on review the visitors will recognise that their discipline let them down, regardless of the interpretation of the laws by the match officials. They also missed too many tackles in the second stanza.

They came close to recording a historic victory, but in the end they let it slip.

Look, generally, the Bok pack was pretty undercooked during this match and seemed to be lacking that physical edge that bullies their opponents into submission.

The Wales first eight were able to keep parity with the much more fancied opposition and were the better unit in cohesion. The Boks grew in stature for sure as the match progressed but will be far from happy regarding their overall showing.

Their undulating outing was perhaps epitomised by the Welsh try scored in 76 minute. A depleted Wales formed an attacking maul with key personal short and still managed to fracture the Bok defence, powering over the line with Dewi Lake dotting down.

It was an embarrassing moment for the Boks, especially a forwards unit that prides itself on its power game and physicality. After the match, replacement Elrigh Louw vowed that it wouldn’t happen again.

The first half showing from the Boks showed that a core group of players are missing a beat.

Chief among them is arguably the skipper himself, Siya Kolisi. There is no doubt that the captain is the talisman in this Boks side and his leadership is not in question here.

His form, however, is.

He didn’t have the greatest season for the Sharks in the United Rugby Championship and that lacklustre form continued at Loftus. He wasn’t bad, but he isn’t near 2019 Kolisi. Nevertheless, he still has time to reach that peak performance.

Faf de Klerk wasn’t great shakes either, to be honest, while Lukhanyo Am and Makazole Mapimpi had relatively quiet games by their standards. Frans Malherbe and Ox Nche were iffy at best. Maybe that was just the nature of this Test, but they will all have to improve in the second Test.

1 Flyhalf a concern but not a crisis … yet

Which brings us to arguably the biggest talking point of the match: Elton Jantjies.

The flyhalf had a terrible game and nothing he did worked out. He was inaccurate and seemed every bit as rusty as you would expect from a player that hasn’t played rugby in over a month. His recent personal troubles could also still be weighing on him at the moment.

The Boks improved when Willemse slotted into the pivot position, with Le Roux also acting as first receiver, making it even more apparent how out of sorts Jantjies was.

After the match, Nienaber went to great lengths to defend Jantjies, but even the 31-year-old’s staunchest of supporters will admit it was a poor outing.

No 10 is now a bit of a concern, especially if Handre Pollard is injured as the depth in the position is shallow at best. Jantjies is not a bad player, however.

He can be quite inspiring in fact. He was a key reason the Boks beat New Zealand last year, but he arguably needs to reach that level of confidence again before he is considered for a starting berth.