Israel Folau injured on return to Test rugby for Tonga 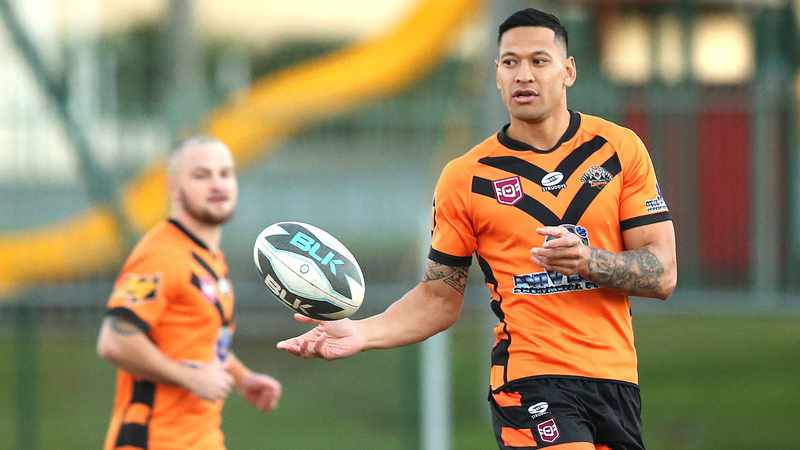 Suva – Former Wallaby Israel Folau’s return to international rugby was cut short by injury on Saturday as his Tonga side slumped to a 36-0 loss to Fiji in their Pacific Nations Cup Test in Suva.

In a forgettable debut nearly four years after he played his last Test for Australia, Folau had just two ineffectual touches prior to limping off in the 27th minute.

The 33-year-old injured his leg in a collision when chasing a kick and it’s unclear if he will be fit for Tonga’s remaining games in the four-nation tournament.

Folau played 73 Tests for the Wallabies before being sacked by Rugby Australia for posting a homophobic social media post and his only rugby since has come this year in the Japanese club game.

Born to Tongan parents, he was eligible for Test selection under new Rugby regulations, which allow an international switch after three years of inactivity.

Two former All Blacks backs — Charles Piutau and Malakai Fekitoa — also made their Tonga debut but they couldn’t halt a Fiji side who dominated up front and scored five tries, including three to France-based professionals.

Lock Tevita Ratuva, wing Jiuta Wainiqolo and centre Kalaveti Ravouvou crossed within the first 25 minutes to hand the hosts a 22-0 lead at halftime.

Outside backs Setariki Tuicuvu and Vinaya Habosi completed the scoring, cementing Fiji’s favouritism to win the tournament a sixth time in 15 editions.

In the earlier game, wing Nigel Ah Wong crossed for his second try in the final minute to lift Samoa to a dramatic 31-26 win over Australia A, having snatched an intercept thrown by Lalakai Foketi, one of five Wallabies-capped players in the beaten side.

Samoa led 19-7 at halftime but Australia A’s fightback began through a try to captain Ryan Lonergan, before Fraser McReight bagged his second and James Tuttle finished a sweeping attack to level the scores 26-26.

The two remaining rounds will be played over successive weekends at Lautoka.