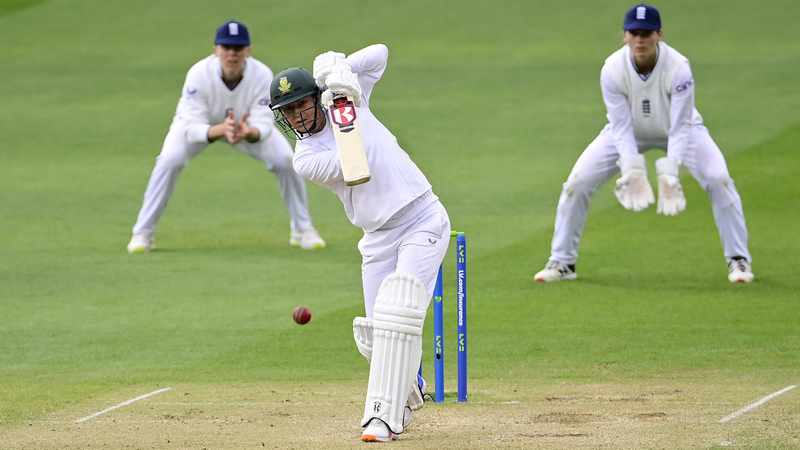 The Proteas women’s team rode the rollercoaster that is Test cricket and when it stopped, they wanted more.

“They enjoyed it a lot. There’s a lot of experience we will take out of this,” captain, Sune Luus, said about her teammates afterwards. The one-off Test with England that ended in a draw in Taunton on Thursday, certainly had all the ups and downs associated with the format. South Africa had to recover from a difficult start with the bat, with Marizanne Kapp, producing one of the great Test innings, to provide a solid first innings total.

They bowled well enough to put England under pressure at 121/5 in the home team’s first innings but then couldn’t press home that advantage, with Nat Sciver and Alice Davidson-Richards sharing a momentum shifting 207-run partnership that put England back on top. “We had a young bowling attack, but they did quite well, all the girls kept running in and gave 100% effort all the time,” said Luus.

They needed some good fortune courtesy of the English weather but a startlingly resolute innings with the bat from nightwatcher Tumi Sekhukhune, in extremely difficult conditions against some very good bowling from England, illustrated how much the players had learned and the determination within the side to prove a point against a more experienced side.

Make no mistake, it was a very positive outcome for a Proteas team that featured nine debutants, and as Luus said later, the two players who had Test experience, Kapp and Lizelle Lee, had only played two matches between them. “(Batting) under lights, enough money in the world can’t by experience like that. The girls thoroughly enjoyed it. And we took everything in,” said Luus.

Kapp of course was amazing and though she didn’t take wickets her remarkable first innings century, which she backed up with a lovely unbeaten 43 in the second dig, underlined her value to her team and her class as one of the modern greats of the sport. “She’s a star,” said Luus.

Asked why she didn’t bowl Kapp more, Luus highlighted the veteran all-rounder’s age. “Ya, she’s not going to like this, and I’m not saying she’s old, but we needed to manage her. Age is creeping up on her and we have a long tour here, with a lot of matches including the Commonwealth Games, which is a focus for us.”

As for Kapp’s batting, there was nothing but praise from Luus. “We laughed quite a bit, because she said before the match that she wants to bat lower in the order because she doesn’t have a game plan for Test cricket. So I don’t know where the 150 came from. She batted extremely well. We can all go and sit with her and talk to her about what worked for her and what didn’t and take those lessons, even into white ball cricket.”

Luus’ sole exposure to the Test format has left her wanting more. “I’m going to have to start watching Test matches soon, because I don’t watch a lot. The girls thoroughly enjoyed it, when we came off the field there were still lots of laughs, and although the situations were tough in certain points the girls really enjoyed it. Some stepped up and hopefully we get some Tests in the near future,” she said.

The outcome of the match will have lifted confidence in the squad for the remainder of the tour. The players will have a few days off, and next week prepare for the three match One-Day series against England that starts on July 11. After that there are three T20 Internationals that will serve as preparation for the Commonwealth Games that begin on July 30.