Springbok debut will be one to cherish, says Salmaan Moerat 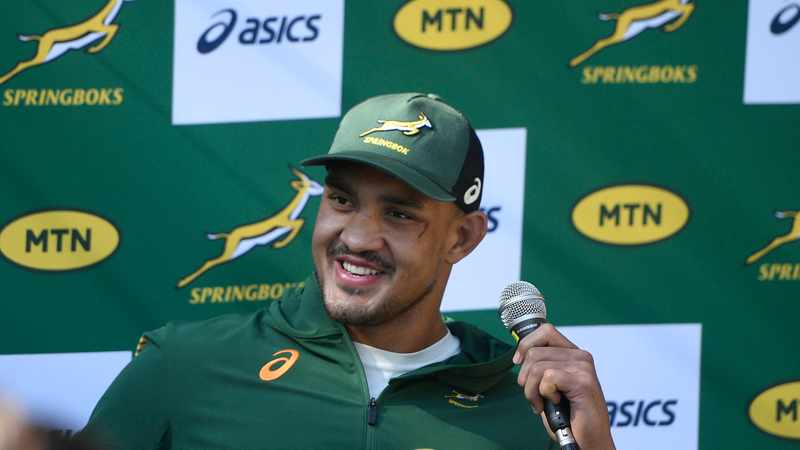 Johannesburg – There will be a lot of emotion swirling around and through Loftus Versfeld on Saturday when the Springboks return to the hallowed ground in-front of a capacity crowd that has not seen them live since 2019.

A raucous reception is expected; a humdrum atmosphere assured; a rousing rendition of the National Anthem to be belted by the 51 000-plus spectators anticipated; and a fanatical cacophony of support for the Boks predicted.

Nevertheless, it will arguably be the personal moments of realisation obtained that will be best recalled in years to come, especially for Springbok debutants Salmaan Moerat and Elrigh Louw.

Both are on the bench for the first Test against Wales this weekend, and will hope to get the call to step onto the pitch later in the match as fully-fledged Springboks. On Tuesday, at the team announcement, the 24-year-old Moerat expressed some of the emotion bestowed by his call-up to the Green and Gold

“It is an absolute dream come true,” said Moerat bashfully.

“It is a very emotional moment for me, myself and my family. It is something that I have been working towards for a very long time. The opportunity is here right now and it is all about contributing to the team, knowing my role and not doing anything flashy …”

Moerat came desperately close to making his debut for the Boks in November last year, touring with the senior national squad in their End of Year Tour. That experience forms a part of the lock’s journey to the here and now where he is only mere days away from calling himself a Springbok.

“I had the privilege of working with (Bok head coach) Jacques (Nienaber) at SA Schools, so I think that is where my journey started with coach,” the former Baby Bok explained.

“Fast-forward a couple of years, I got the privilege of joining the team last year – got to know their structures, got to know how they do things round here. So, it has been a good journey.

“I have had a couple of injuries along the way but I guess that is a part of the game. Hopefully, on Saturday, the boys can do well and we all can get an opportunity to get onto the field.”

Moerat is fresh off lifting the United Rugby Championship trophy with the Stormers in a season that has seen him grow as a player and leader. Nonetheless, he is acutely aware that it is here, within the Boks setup, that he has been granted the opportunity to further develop his game and learn more of his craft.

To do so, he can call on the wisened heads of veterans Eben Etzabeth, Lood de Jager and Franco “Sous” Mostert.

“It is a comforting factor, playing with players like that,” Moerat said, referring to that trio.

“They have helped me through this week and they will continue to help me. For me it is just to rub off on them, take advice from them and execute my job. It really is a plus to be playing with them.

“The great thing about being in this environment before you go into a Test match is, you know what your role is and you are expected to execute that, and also expected to do more than that.

“Hopefully, I won’t have to use my voice as much,” he concluded with a raspy voice.