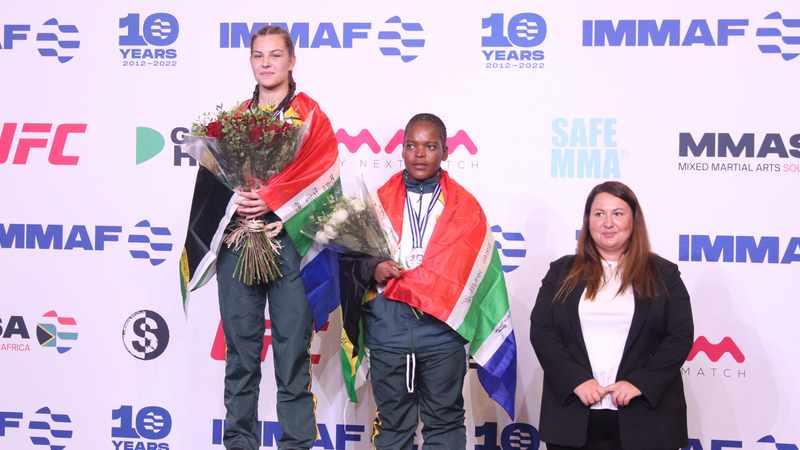 Aside from EFC matchmaker Graeme Cartmell slowly but surely adding more girls and women to the Extreme Fighting Championship roster, it is the amateur scene that gets the purists excited about the future of Women’s MMA.

One of those talented prospects is the new African Lightweight champion, Kiara Fegen.

Fegen beat her teammate Londiwe Hadebe in the final of the women’s lightweight division to earn gold. And when she asked that we get the UFC (Ultimate Fighting Championship) cage branding in the shot, it was clear that this young talent has her eyes on the big stage.

“I would love to take this (combat sport) as far as I can,” says the 20-year-old Fegen.

“I have been focused on my jiu jitsu career for the past five years now, so I am expanding to the MMA side to learn more and do more competitions,” adds the Alberton-born athlete who beat Wilmarie Alberts via a rear-naked choke in their lightweight MMA bout at Megalodon Fighting Championship (MFC) in Johannesburg recently.

“That does not mean I am going to push my jujitsu career aside,” says Fegen who initially got into combat sport for self defence purposes before the bug instantly bit.

Fegen’s healthy obsession with her craft is what makes her a compelling argument as one of the top stars for the future.

“I am pretty much always training. I started doing jiu jitsu competitions six months after I started training and it was difficult as I was the only female and I was going up against many males in my weight class, but I never let that get to me. I still came out with a gold on many occasions,” says Fegen who often competed against women 20 years older than her when she had the chance to compete with ladies.

Fegen is a strong advocate for combat sport and believes it can be beneficial to all girls and women.

“I think that every woman should at least get to blue belt level in jiu jitsu or at least two years of MMA training, just to defend themselves. For me, I used to be extremely shy and self-conscious, but now I have more confidence, I’m a lot more friendly and I know that if it comes down to it, I would 100% put up a fight,” adds Fegen, touching on the South African climate which is riddled with gender-based violence.

Fegen credits her family for the strong structure in place for her to thrive in combat sports.

“I’ve got people around me that support and motivate me. My mom, dad and younger sister, family friends, and just people in my daily life,” says Fegen who loves nothing more than relaxing at home watching tv or painting and drawing when she’s not working or training.

Fegen is primed to take the world by storm if she continues on her current trajectory. With her laser-sharp focus, grit to withstand the toughest situations, a smile and attitude that is very marketable, Kiara herself will be her only downfall.

She may still be “young” in the MMA game, but she has the wisdom to understand that patience is key in building a successful brand.

“I am not in a hurry to turn professional,” says the amateur athlete who has a record of 3-0 in the MMA cage.

“I am focused on the South African MMA Nationals coming up in July and then the Championships after that.