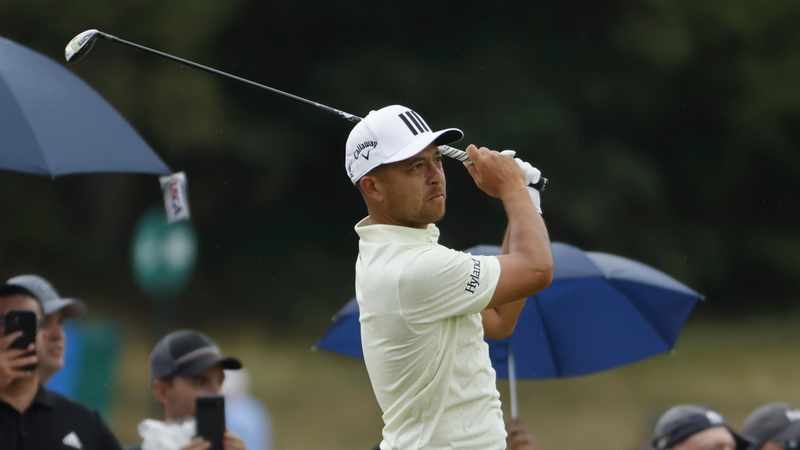 Schauffele celebrated his sixth career PGA Tour victory and his second of the season after shooting a 2-under-par 68 in the final round. He finished the tournament at 19-under par, while Poston and the rookie Theegala settled for a second-place tie at 17 under.

“There’s been a lot of talk about where golf is right now, sort of some can say the fracturing of our game, but the future’s bright,” Schauffele said.”And I feel like an old guy. I’m 28 years old and I feel like I’m one of the old guys out here on (the) Tour, unfortunately. I got all these young guys winning around me that it just motivates me to push harder and be better. So thanks to them.”

Theegala grabbed a one-stroke lead after making birdie on No. 17, which marked his third birdie in a five-hole span. But he found trouble on No. 18, hitting his first shot into a fairway bunker and failing to hit his ball out of the bunker on his second attempt.

The rookie finished with a double bogey on the final hole, and Schauffele capitalized with a birdie on No. 18 to win the championship.

“I’ve been out here long enough, this is my sixth year on Tour, and you just know that no one’s going to give it to you, not out here on the PGA Tour,” Schauffele said. “No one is going to hand you a win.

“I was very aware of that and ready to birdie the last and I thought that was going to be to get in a playoff. So just lucky it was to make me on top.”

Meanwhile, Theegala said he never imagined that things would go so badly on his final hole.

“I did everything I thought I had to do and it just happened to be everything bad culminated on one hole,” Thee gala said. “I did so much good. I didn’t really even have to scramble much today. I don’t think there’s anything I’m going to be doing differently. Just going to keep sticking to my process and loving every moment of it and, yeah, just keep it going from there.”

Happy anniversary to the champion 🥂 pic.twitter.com/38SGewcIcv

Schauffele had four birdies and two bogeys on the final day of the tournament.He shot below par in each of the tourney’s four rounds, posing a 63, 63, 67and 68 as his peers unsuccessfully gave chase. He went the first 48 holes of the tournament before his first bogey.

Poston carded a 6-under-par 64 on Sunday to surge into a tie for second place.Theegala finished with a 3-under-par 67.

Michael Thorbjornsen (66 on Sunday) finished fourth at 15 under par for the tournament, and Chesson Hadley (64) was fifth at 14 under par.