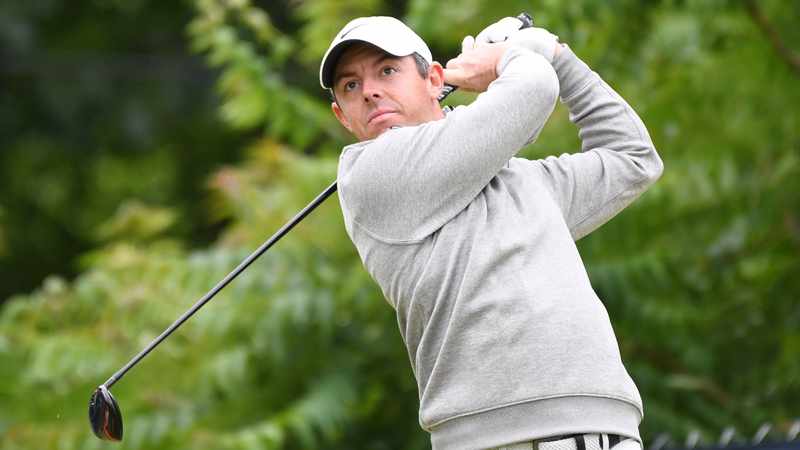 New York – Rory McIlroy fired an eight-under-par 62 to grab a share of the lead after the first round of the PGA Tour’s Travelers Championship on Thursday.

McIlroy, continuing an impressive run of recent form that included victory at the Canadian Open and a top-five finish at last week’s US Open, reeled off eight birdies in a flawless bogey-free round at TPC River Highlands in Cromwell, Connecticut.

Starting on the 10th hole, McIlroy began slowly with three straight pars before picking up birdies on the 13th, 15th and 18th holes to reach the turn at three under.

But his round caught fire down the stretch. He drilled a wedge from the fairway on the par-four first to six feet to set up a birdie before rolling in a 13-foot birdie putt at the third hole to move to five under.

Playing the last perfectly 💪@McIlroyRory finishes with an 8-under 6️⃣2️⃣ and the solo lead. pic.twitter.com/MXSfGnnTpe

He then reached the green in two on the par-five sixth hole and although he missed his eagle putt, he tapped in for birdie.

McIlroy followed that with a 47-foot monster putt for birdie on the seventh to move to seven under, and another superb chip to two feet set up a birdie on the last.

“Anytime you start with a 62, you’re going to take it,” a satisfied McIlroy said.

The Northern Ireland star  said the forgiving layout at River Highlands came as a welcome relief after the brutal challenge of last week’s US Open, the major which bills itself as the toughest test in golf.

“It’s like the anti-U.S. Open here,” McIlroy said. “It’s like U.S. Open rehab coming here. You’re like, ‘Oh, I can actually make some birdies. This is nice.’”

McIlroy has emerged as one of the most vocal supporters of the PGA Tour in recent weeks as golf grapples with the turmoil caused by the rise of the Saudi-backed LIV Golf tournament.

The 33-year-old four-time major champion insists however that the off-course controversy – and his staunch advocacy for the PGA Tour – is not a distraction.

“I feel fine,” McIlroy said. “I get asked questions, I answer questions, and I move on with my life. What the other guys do doesn’t affect me.”

McIlroy was joined at the top of the leaderboard by J.T Poston, who birdied his final hole to complete his own bogey-free eight-under-par 62.

number 162 Poston had looked poised to overhaul McIlroy at the top of the leaderboard after a blistering opening nine holes, that saw him make six birdies – including five in a row – to reach the turn at six under.

But Poston found birdies harder to come  spree dried up down the stretch, making six straight pars after the turn before finally picking up two more birdies in the last three holes.

“It was nice to kind of finally put some good swings together, hit some good shots and make some putts,” Poston said.

“I feel like my scores and my results may not have shown that the last few weeks or months, but I felt like I was getting close, and I’ve been working hard at it. Today was kind of one of those days where it finally clicked a little bit.”

McIlroy and Poston are one shot clear of Xander Schauffele and Scotland’s Martin Laird who both shot seven-under-par 63s.

A group of three players — Charles Howell III, Webb Simpson and Patrick Cantlay — are a further shot back on six under.

Matthew NeSmith and Australia’s Cam Davis are also firmly in the hunt after shooting five-under-par 65s.