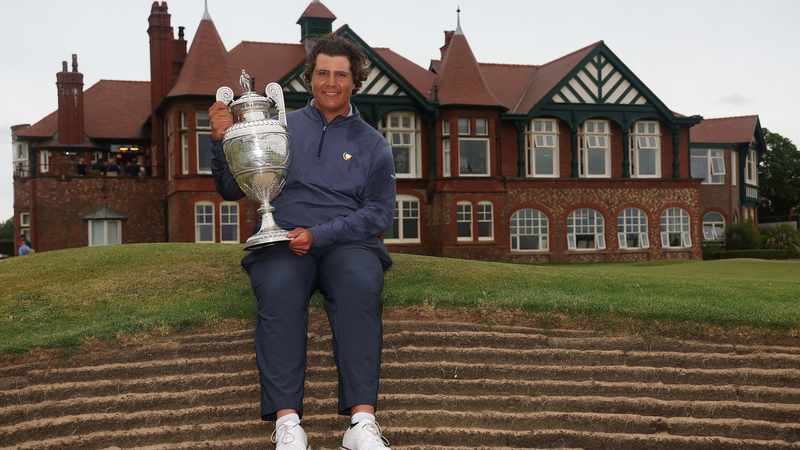 Johannesburg – The 150th Open. The 87th Masters. The 123rd US Open. This is where teenage sensation Aldrich Potgieter will be heading in the year after he claimed amateur golf’s biggest prize with his dream win in the 127th Amateur Championship at Royal Lytham & St Annes on Saturday.

In a thrilling 36-hole final at the Lancashire links, the 17-year-old South African displayed a maturity beyond his years and stood his ground in the face of a superb comeback from Englishman Sam Bairstow to seal a nail-biting 3 & 2 victory.

With the win, Potgieter became the third SA to lift the prestigious title after Bobby Cole (Carnoustie, 1966) and Jovan Rebula (Royal Aberdeen, 2018), and the second youngest winner of The Amateur since Matteo Manassero triumphed in 2009 at the age of 16.

“It’s really amazing,” Potgieter said. “I can’t really find the words; there’s no feeling like it and I haven’t felt this good before. It will take some time to sink in, because right now the words can’t even come out of my mind to describe how I feel.”

The GolfRSA National Squad member was extraordinarily impressive over nine rounds considering this was his first-ever visit to the UK and only his third competitive start on British soil.

He laid down a marker for the life-changing achievement with rounds of 71 (Royal Lytham) and 69 (St Annes Old Links) in the 36-hole stroke play qualifier – won by fellow squad member and reigning SA Stroke Play champion Jono Broomhead – to advance to the match play stage.

Match play can easily play with your emotions and none more so than going into a 36-hole final.

Facing Bairstow, the 2021 Brabazon Trophy winner and obvious crowd favourite, was always going to be tall order, but Potgieter quickly stamped his mark on the match and a superb bogey-free four-under-par 66 in the morning session earned him a seven-up lead.

If you take the lead in match play, you may become more relaxed, and a player who has the lead will probably play more conservatively, but Potgieter did not hold back over the final 18 holes.

People always ask why I love to work with the amateur talents of this country… for moments like these!!
Super, super proud of Aldrich Potgieter & of all our Squad boys – fantastic team spirit, great ambassadors for @GolfRSA & so #proudlysouthafrican!! pic.twitter.com/48sDIcDS58

He conceded the 21st hole to a Bairstow birdie, and the Englishman won the 24th with a birdie, but the big-hitting South African reclaimed a six-up lead with a birdie of his own on the 26th hole.

Bairstow’s charge gained momentum on the back nine and the Hallowes golfer clawed back the 28th, 30th and 31st holes.

Potgieter’s lead was cut to just two-up after he doubled the 32nd hole, but with four holes to play, his superb short-game held up under pressure.

A crucial par on the 33rd hole — the par-4 15th — took him back to three-up and Potgieter was left with two putts for the win on the par-4 16th after Bairstow’s birdie putt stayed out.

Potgieter’s achievement at Royal Lytham, combined with his rise in the world rankings over the last three years, has been nothing short of spectacular.

In 2019, he was ranked 6,000th on the Amateur Golf Ranking, but by the time the family returned to SA in December last year after nine years in Australia, he had risen to 2,800 and was West Australia’s No 1 junior, Golf Australia’s No 6 junior and ranked 26th on the Golf Australia Open Amateur rankings.

Ranked 140th before the dream week at Royal Lytham, Potgieter has cemented his spot alongside fellow GolfRSA National Squad members Casey Jarvis and Yurav Premlall in the International Team for the 2022 Junior Presidents Cup in North Carolina in September.

But first, he can now look forward to competing in the 150th Open at St Andrews in July.

“I’m really excited. I played the Old Course recently during The St Andrews Links Trophy and it was really amazing,” said the young champion.

“I think the course is going to get in better shape and I’m really looking forward to the experience. The Open has always been my favourite Major because of all the history it holds.

“I never in my wildest dreams would have thought I’d be playing The Open at this age. It’s a dream come true and it’s going to be a tough few weeks, waiting out the return trip back to St Andrews.”