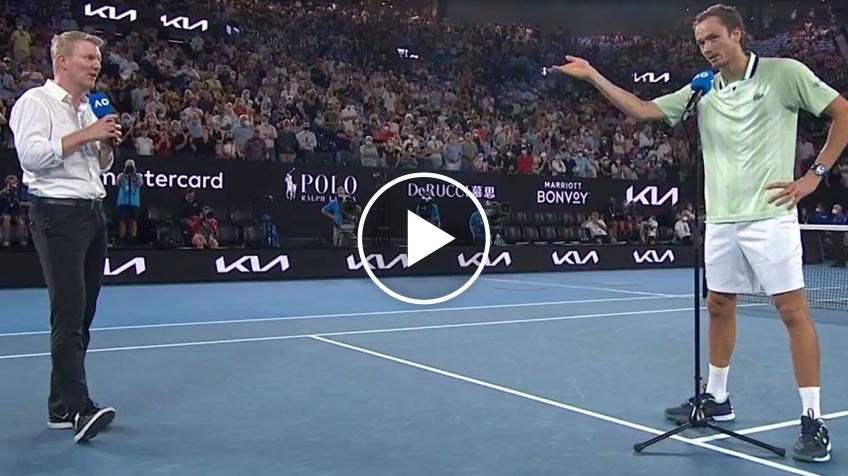 Former world No. 1 Jim Courier thinks Daniil Medvedev is “authentic” as he admires the Russian for always being honest. At the Australian Open in January, Courier was doing an on-court interview with Medvedev following the Russian’s win over Nick Kyrgios.

The Australian crowd wasn’t letting Medvedev do his interview in peace and it led to the Russian demanding from the crowd to show some respect to former Australian Open champion Courier. “Those post-match moments with the players, where they can showcase who they are, when the mask drops for a second, are so vital for the sport,” Courier told The Age.

“And not everyone wants to be loved by everyone. Medvedev is perfectly fine if people don’t like him. But I kind of love it about him because he’s just authentic, he’s not polished, not media trained. He’s just going to let you know what he’s thinking and there’s something magical about that”.

While Courier was posing a question to Medvedev, the Russian interjected him and demanded the Australian crowd to show some respect. “Sorry I can’t hear you,” interjected Medvedev.

“Guys I can’t hear him, please show some respect for Jim Courier, he won here guys”. Courier finished his career with four Grand Slams and two of those four victories came at th Australian Open. “Let him speak guys.

If you respect somebody, at least respect Jim Courier. I cannot hear him guys,” Medvedev told the Australian crowd. After beating Kyrgios in the second round, Medvedev went on to reach his second Australian open final.

In the final, Medvedev appeared to be heading toward a straight-set victory over Rafael Nadal but the Spaniard pulled off a stunning comeback to win the Australian Open title. Medvedev was up by two sets, had a 3-2 lead in the third set and three consecutive break points in the sixth game, before Nadal stormed back to win 2-6 6-7 (5) 6-4 6-4 7-5.