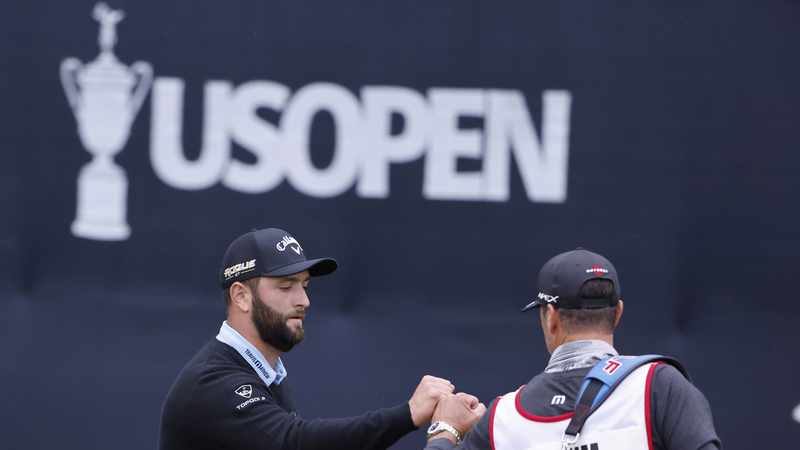 Second-ranked Spaniard Rahm birdied three of the last five holes but hit into bunkers on his first three shots at 18 for a double bogey to shoot one-over par 71 and stand on three-under 207, one stroke behind co-leaders Will Zalatoris of the United States and England’s Matt Fitzpatrick after 54 holes at The Country Club.

“I’m very content. I’m not going to lie. I have to consider that I have 18 holes and I’m only one shot back. That’s the important thing,” Rahm said.

“I know somebody behind is going to come out hot and is going to post a score, and I know I’m going to have to play good and probably shoot in the red numbers. That’s my job.”

Third-ranked McIlroy, with three bogeys and a short birdie putt miss in the first six holes, salvaged a 73 to stand on 209, three adrift but within reach.

“I’m sort of going home thinking that I held this round together when it could have got away from me quickly,” McIlroy said.

“I certainly thought I was going to be a few shots further back than I was at the end of the day, but Jon struggled there coming in. Even though it was such a tough day and I feel like I battled well, to still only be three back going into tomorrow I feel is a good thing for me.”

Both Scottie Scheffler and the fans knew just how important this might prove on Sunday. pic.twitter.com/QcI6DuGROv

number one Scheffler, chasing his fifth title and second major of the year, is primed for the mental and physical challenge of Sunday’s final round.

“The US Open is very taxing, mentally and physically. I think that’s all part of what makes this tournament so fun,” he said.

“You’re going to get tested all different kinds of ways, whether it be physically, mentally, whatever it is. I think that’s kind of the fun of it.

“If every golf tournament was like this, it would be in for a long season for all of us. A few times a year I think it’s a ton of fun.”

Scheffler, trying to match Tiger Woods as the only world number ones to win the US Open, would be the first to manage the US Open-Masters double since Jordan Spieth in 2015 and just the seventh ever on a list that includes Tiger Woods, Arnold Palmer, Ben Hogan and Jack Nicklaus.

Rahm could become only the second non-US player to win consecutive US Opens after Scotsman Willie Anderson took three from 1903-1905. He can’t be worried about his rivals.

“I just have to do me,” Rahm said. “I can’t control what the guys ahead or behind me are doing. I just have to focus on myself and play my golf, shot by shot, try to be as committed as possible to each shot.

“The second you get too caught up in what others are doing at a US Open is when you start making bogeys and double-bogeys in a row.”

McIlroy seeks his first major title since 2014. He won last week’s PGA Canadian Open and could become the first player since 1934 to win the week before and then capture the US Open.

He found Saturday’s windy conditions playing havoc with his putting.

“I started to play the wind a little bit on the putts, and the wind was definitely affecting them,” McIlroy said. “I just haven’t putted in this much wind in a while.

“Then you’re in two minds: Is this next putt going to be hit by the wind, or is it not? It was hard.”

It made him dig in fiercely at the end, with one birdie, one bogey and 10 pars in the last 12 holes.

“In situations like this where the run could have got away from me, I just dig in there a little bit more,” McIlroy said.

“Just keep hanging around. I did well to get it in under par for the tournament.”