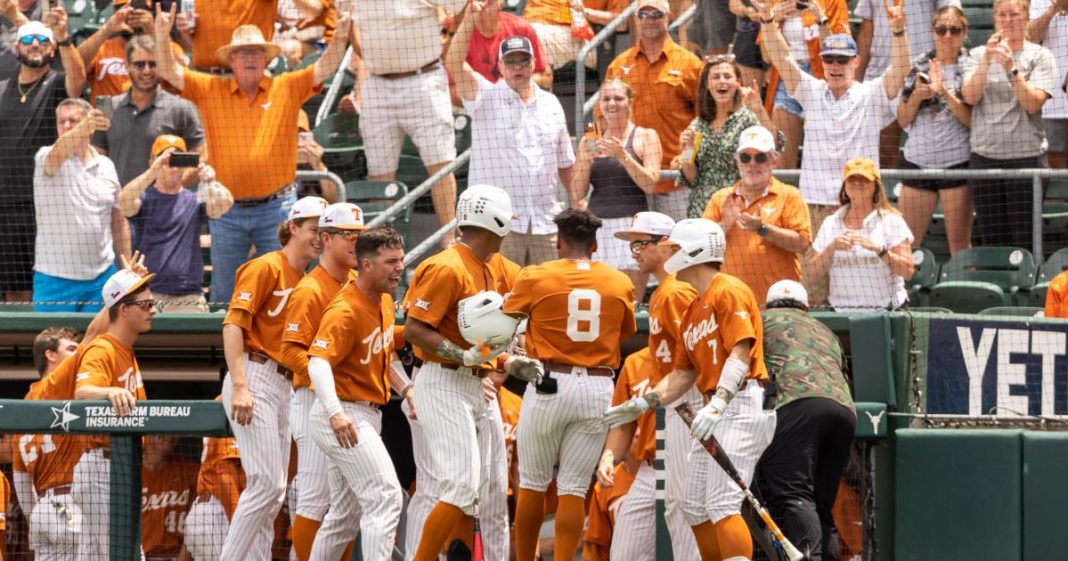 Following an entertaining Super Regional round, the 2022 College World Series returns to Charles Schwab Field in Omaha on Jun. 17. The eight-team, double-elimination tournament figures to provide some unforgettable moments – and plenty of opportunities for bettors to cash in on intriguing odds.

If you’re interested in getting involved in the CWS futures markets, Sporting News has you covered. Below, we’ll break down the top teams and a couple of sleepers who can win the College World Series.

It’s important to note that these odds will change as the College World Series progresses.

Texas enters Omaha as the betting favorite after Tennessee was ousted in Game 3 of the Knoxville Super Regional by Notre Dame. The Longhorns are worthy of being the odds-on favorite, having lost in the semifinals to the eventual champion Mississippi State in Omaha a season ago.

There was some pessimism surrounding the Longhorns’ return to Omaha last weekend, as Texas dropped Game 1 of the Greenville Regional to East Carolina 13-7 and then trailed the Pirates 8-2 in the bottom of the seventh inning of Game 2. Texas’ relentlessness and offensive firepower propelled the Burnt Orange through Greenville, and it now attempts to win its first CWS since 2005.

Outside of the Longhorns’ dominant 11-1 victory in Game 3 of the Greenville Super Regional where No. 3 starter Tristan Stevens tossed six innings of one-run ball, their pitching staff underwhelmed. However, despite its rough Super Regional performance, Texas’ pitching staff is usually a reliable unit that’s built for the CWS format. Longhorn pitchers enter Omaha ranked 17th in the NCAA in WHIP (1.30) and 23rd in ERA (4.18).

Texas’ opening tilt against Notre Dame (Friday, 7:00 p.m. ET) is a make-or-break type of game, as the Longhorns can ill-afford to fall into the losers bracket. Texas will run out their ace and third-team NBCWA selection Pete Hansen (11-2, 3.40 ERA, .223 OBA), who looks to bounce back after an uncharacteristically inefficient Super Regional outing.

Stanford, the other CWS qualifier from a season ago, has a real shot to win its first title since it went back-to-back in 1987-88. David Esquer’s squad has a deep and dangerous offense that lit up the scoreboard in the Palo Alto Super Regional, scoring 30 runs over three games.

The one glaring concern that might hinder Stanford’s quest to claim its third-ever title is its pitching depth. Game 1 starter and Pac-12 Pitcher of the Year Alex Williams was lit up by Connecticut last weekend (1.1 IP, 7 H, 6 ER) and could not make it out of the second inning.

While it’s safe to assume Williams will be more effective in Omaha, after him, a consistent No. 2 starter hasn’t emerged. The Cardinal had to go with bullpen games in essentially all three Super Regional contests, and while their relievers did a solid job of holding down Connecticut’s offense, their opponents in Omaha will be much better.

Stanford’s offense is good enough to carry it to a CWS title. Esquer’s done a fine job of navigating his bullpen’s usage, but it’s fair to wonder if he can survive the week-long CWS format.

Oklahoma is a realistic dark-horse contender to win the 2022 College World Series thanks to its starting pitching depth, offensive firepower, and bullpen stability.

Jake Bennett (9-3, 3.53 ERA, .235 OBA) is a future MLB rotation piece who can lead OU to a Game 1 victory over Texas A&M. Bennett’s last outing in Game 1 of the Blacksburg Super Regional was dominant, as the 6-6 lefthander gave the Sooners seven quality innings, allowing just one run and striking out eight in Oklahoma’s 5-4 win.

Following Bennett’s removal, the Sooners’ high-leverage bullpen option, Trevin Michael (4-1, 2.94 ERA, .209 OBA), shut down the Hokies in the eighth and ninth. Michael ended up recording the final six outs in both of OU’s Super Regional wins, sporting a dominant 8:0 K:BB rate while not allowing a base runner. On the season, Michael’s posted a ridiculous 90:18 K:BB rate over 64.1 innings and has elite swing-and-miss stuff.

Add in OU’s .298 team batting average, and you have a potential sleeper team from the Big 12. A large reason why Oklahoma is priced at +700 has to do with Texas (+500) and Notre Dame (+500) being on OU’s side of the bracket. You can’t deny that Oklahoma is playing its best baseball at the right time.

Auburn clinched its first trip to Omaha since 2019 with a Super Regional win over third-seeded Oregon State. Auburn’s a sleeper to make a run in Omaha, as it’s positioned on the “weaker-half” of the bracket with Stanford, Arkansas, and Ole Miss.

While the Tigers are priced with the second-highest odds to win the CWS, there’s something to be said for a team that went on the road and knocked out one of the favorites to win the CWS entering the Super Regional round.

The Tigers’ offense is led by 1B Sonny DiChiara (.392 average, 22 HRs) who had a momentum-shifting two-run homer in Auburn’s CWS clinching win over Oregon State on Monday night. After DiChiara, junior infielder Blake Rambusch sits second on the team in batting average (.336) and leads the team in stolen bases (16).

Don’t be surprised if Auburn makes a run to the CWS Finals and claims its first National Championship in school history.