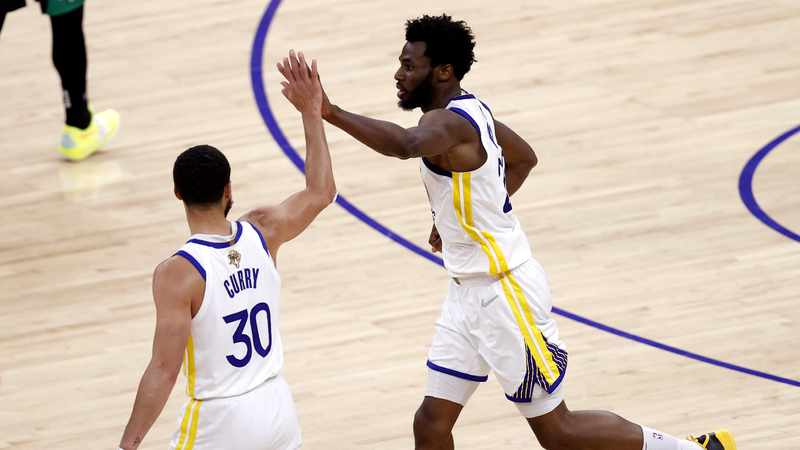 San Francisco – Andrew Wiggins scored 26 points as the Golden State Warriors battled past the Boston Celtics 104-94 to move within one win of a seventh NBA championship crown on Monday.

With Stephen Curry having a rare off-night after his 43-point game four heroics, Wiggins seized control to lead a balanced Golden State offensive effort which leaves the Warriors 3-2 up in the best-of-seven series.

Wiggins delivered a huge performance at both ends of the Warriors’ Chase Center court, shooting 12-of-23 while hauling in 13 rebounds with two steals and a block.

The Warriors can clinch the championship when the series heads back to Boston for game six on Thursday.

“We have two cracks at getting one win, but we also know how difficult it’s going to be,” Warriors coach Steve Kerr said.

“Nobody’s celebrating but we are excited to be in this spot and we want to take advantage of it.”

Kerr led the tributes for Wiggins, the Canadian former No.1 draft pick who has steadily become an integral part of the Warriors set-up since joining the franchise two years ago.

“He loves the challenge. He loves the competition. And he’s found such a crucial role on our team, and I think that empowers him,” Kerr said. “He knows how much we need him, so he’s been fantastic.”

Wiggins led the Warriors scorers while Klay Thompson provided support with 21 points including five three-pointers. Gary Payton II (15 points) and Jordan Poole (14) both made double-digits from the bench.

Curry, the Warriors’ talisman and front-runner for NBA Finals MVP, chipped in with 16 points but shot only 7-of-22 from the field, going 0/9 from three-point distance.

It was the first time in Curry’s playoff career he has failed to score a three-pointer and the first time he has drawn a blank from beyond the arc in any NBA game since 2018.

“I think Steph was probably due for a game like this,” Kerr said. “But we’ve got a lot of talent and a lot of depth that can make up for that, and the guys did a good job of that tonight.”

Warriors star Draymond Green, who had an improved performance despite fouling out in the fourth quarter, said Curry’s display was good news for Golden State.

“He’s going to be livid going into game six, and that’s exactly what we need,” Green said.

"I'm just trying to do every little thing to win."

—Andrew Wiggins after his career performance in Game 5 pic.twitter.com/kOf7ShN3Jp

But the Celtics, who effectively marked Curry out of the game for long periods, were left ruing another high turnover count of 18 compared to just six from Golden State.

Boston had threatened to produce a repeat of their stunning game one win in San Francisco during a rampant third quarter display in which they outscored the Warriors 35-24 before fading in the fourth quarter.

Celtics coach Ime Udoka lamented his team’s inconsistent form from one quarter to the next.

“That’s the thing — (what) we’re not having throughout a full game is consistent efforts, sustained effort, more so offensively than anything,” Udoka said.

“That’s the part where we got to have carryover, not only game to game but quarter to quarter, where we saw it happened in the third but not the fourth.”

After a superb Golden State defensive performance in the first half, Boston had been restricted to just 39 points to trail 51-39 at the break.

But the Celtics flipped the switch after the interval, erasing Golden State’s advantage in a matter of minutes with back-to-back Tatum three-pointers to get within two at 51-49.

Smart drained another three soon afterwards to tie the game at 55-55 before Al Horford rained in another triple -– Boston’s eighth straight three-pointer -– to give the Celtics their first lead of the game at 58-55.

Boston would go on to lead by five points at 66-61 -– a 17-point turnaround from half-time -– but the Warriors dug deep to respond.

Poole’s buzzer-beating three-pointer put the Warriors ahead 75-74 heading into the final period.

The Warriors regrouped in the fourth quarter, Wiggins driving home a layup to launch an unanswered 10-0 run by the home team that gave Golden State a hefty 11-point advantage at 85-74.

From there the Warriors never looked like surrendering the initiative and Wiggins would go on to score 10 points as the Warriors slammed the door to close out a deserved win.