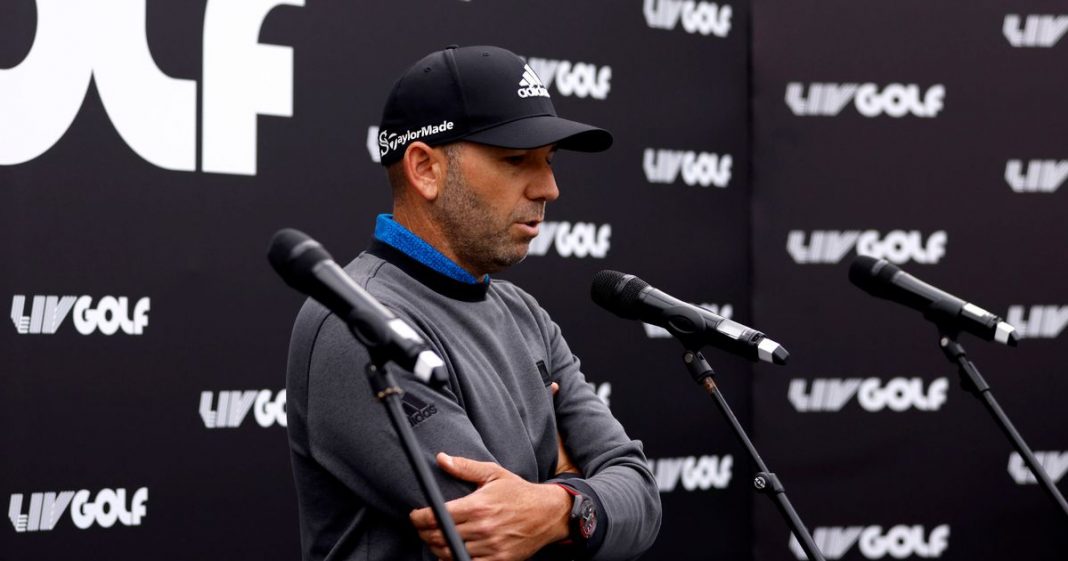 Sergio Garcia and Graeme McDowell last night appealed to the DP World Tour to allow them to keep playing through golf’s civil war – and for the European Ryder Cup team.

The launch of the new LIV Golf Invitational in Hertfordshire yesterday was overshadowed by the PGA Tour banning all 17 members who had teed up without permission. The news came just 30 minutes after the glitzy big tee off in a premeditated PR counter strike as the battle for golf’s soul – and cash – got dirty.

But former US Open winner McDowell revealed he had quit the America tour just half an hour before his round. And Europe’s record Ryder Cup scorer Garcia, who resigned last week, said he now wants to play the eight LIV events, the Majors and selected DP World events. If he is not banned in Europe too.

“I resigned because I don’t want to get into any legal battles with anyone,” said the Spaniard. “But I haven’t resigned from the European Tour because I would like to still be a member. I’m European, I love the European Tour. I played it for 23 years.

“Obviously we’re going to have to wait and see what the European Tour does. But I definitely would like to keep my membership and get my chance to make The Ryder Cup Team because I love that event. But we’ll wait and see what happens over there.”

While the PGA Tour acted quickly yesterday, the DP World Tour has yet to announce any sanctions. The two have signed a strategic alliance but have acted independently against the threat of the Saudi-backed breakaway league.

And GMac, who holed the winning putt for Europe in 2010, said: “I felt like the PGA Tour was going to take the hard stance. Will (DP World Tour boss) Keith (Pelley) follow suit? I hope he doesn’t. I think he has a fantastic opportunity here with a lot of European players and European Tour players that would like to subsidise their schedule with other events, especially if we are not allowed to play on the PGA Tour. I really hope The European Tour makes a good decision. Watch this space.”

GMac claimed his resignation was “a tough decision” but added: “Unfortunately this is going to be short-term pain, but I think all the players that are here this week have only been strengthened in their confidence that we are making the right decisions here. We feel like we should have been issued releases. We’re in the U.K. You’ve players like myself and Ian Poulter and Lee Westwood, we are in our home markets here. We should be allowed to operate here as professional golfers.”

The new format saw London black cabs ferry the 48 players to the tees for the shotgun start. There were Grenadier Guards on the first tee to herald the opening shots and a fly-past by an aerial display team.

Former Masters champion Charl Schwartzel leads after a first-round 65 while his South African Stingers top the team competition after 18 of the 54 holes.