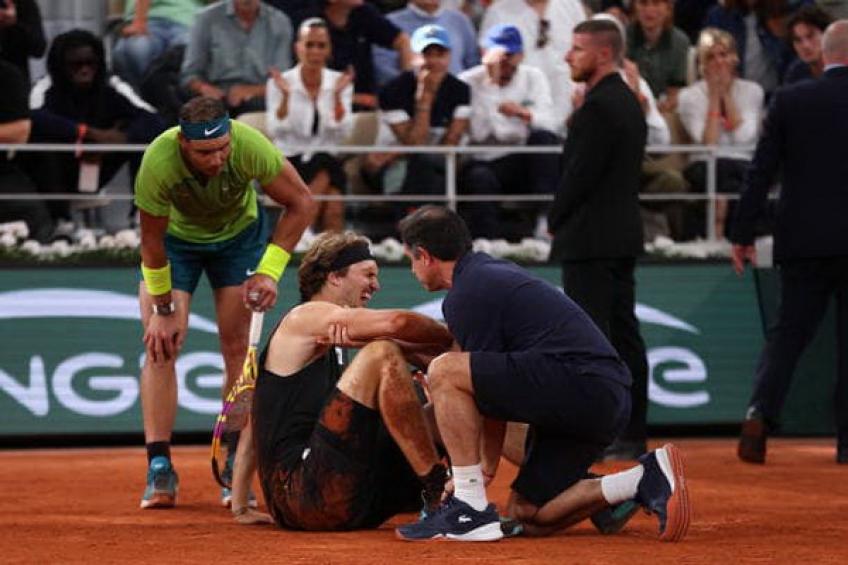 Alexander Zverev will crack the top-2 next week for the first time in his career. The German will not celebrate the achievement in Halle or Wimbledon after undergoing surgery on his right ankle on Tuesday. Alexander tore three of his lateral ligaments during the Roland Garros semi-final clash against Rafael Nadal, giving his everything against the king of clay and keeping him on the court for three hours before the end of the second set!

Zverev made a bad step on the slow clay in the second set’s 12th game’s last point and injured his ankle, falling to the ground and screaming in pain. He went off the court in the wheelchair before returning a few minutes later on crutches, only to announce his retirement.

Alexander and his team went for further checks and decided to undergo surgery. Zverev will stay off the court for at least a month and a half, and he should be back at some point in August if everything goes right.

Alexander Zverev underwent surgery after injuring his ankle in Paris.

Thus, the German will skip the season’s third Major at Wimbledon for the first time since 2014.

Alexander’s retirement versus Rafa was his first in a career, doing everything right for over three hours before a terrible setback. Zverev built the advantage in the opening set before Nadal broke back in game eight. The Spaniard fended off four set points in the tie break and claimed five straight points from 6-2 down.

After more drama, Rafa stole the breaker 10-8 and claimed the opener after grueling 91 minutes. Zverev broke four times in a row in the second set and opened a 5-3 lead before failing to serve out for the set. Nadal stayed in contention, and he moved through after the 12th game, as his rival could not continue due to severe pain in his right ankle.

“We all have our own journey in life. This is part of mine. Next week I’ll reach a career high ranking of number 2 in the world, but this morning I had to undergo surgery. After further examination in Germany, we received confirmation that all three of the lateral ligaments in my right ankle were torn.

To return to competition as quickly as possible, ensure all the ligaments heal properly and reclaim full stability in my ankle, surgery was the best choice. My rehab starts now, and I’ll do everything to come back stronger than ever!

I’m continuing to receive so many messages and would like to thank everyone once again for supporting me during such a difficult time,” Alexander Zverev said.