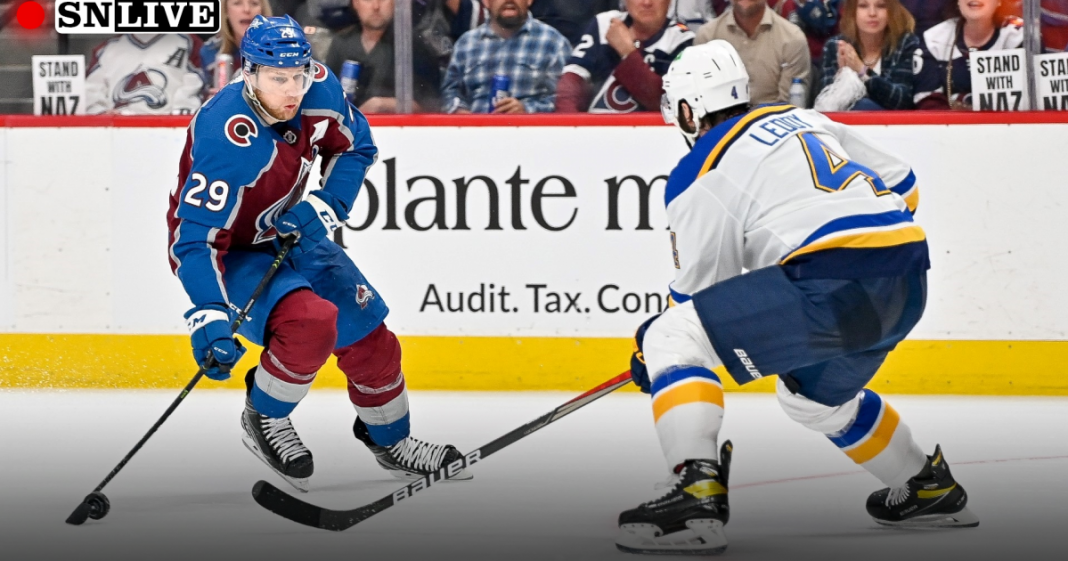 The Avalanche were less than one minute away from advancing to the Western Conference finals on Wednesday. The Blues had other plans.

After Robert Thomas tied the game with 56 seconds left on a rebound goal, Tyler Bozak ripped a slap shot by Darcy Kuemper to give the Blues a 5-4 OT win, keeping their season alive for at least one more game.

Now, Colorado is attempting to close the series out again as they hold a 3-2 lead heading into Game 6 on Friday night. St. Louis has the same plan as it did just two nights ago — win a game and keep their hopes of a Stanley Cup alive.

Colorado has lost in the second round in four consecutive postseasons, but a win tonight will change that, giving them their first Western Conference finals appearance since 2001, when they hoisted the Stanley Cup. Blues need a win tonight and in Game 7.

The winner of this series will go on to play the Oilers, who ended their second-round series with the Flames on Thursday night thanks to Connor McDavid’s OT winner.

10:07 p.m.: Excellent pad save by Husso on Kadri. Makar with a great seam pass to Kadri cutting to the net, but Husso stops it. He’s been the difference maker tonight.

9:45 p.m.: End second, Blues lead 2-1. Colorado controlled most of the play, but after the Schenn goal, St. Louis swung the momentum their way. Could have been 3-1 if not for the Manson block on Kyrou. Shots 26-14 in favor of Avs.

9:44 p.m.: Another chance for Kyrou as a long pass sends him in on the breakaway, but he misses wide. Excellent pass from Robert Bortuzzo to Kyrou at the far blue line. Blues finding their flow late in the second.

9:41 p.m.: Oh my word, what a save by Manson. Kuemper slides way too far out as a pass goes across the slot to Kyrou. Kyrou waits and pulls to the back hand, has a wide open net, but Manson blocks it. Avs kill off the MacKinnon minor.

9:37 p.m.: For the first time, the Blues have the momentum. First it’s a shot off the post by Alexei Toropchenko, then he follows it with another great chance as he cuts to the net, but Kuemper stays square and stops it. Great shift that results in MacKinnon called for a trip, St. Louis to its second power play.

9:34 p.m.: Blues kill off the Thomas penalty. Some solid possession from the Avs, but couldn’t take advantage.

9:32 p.m.: Robert Thomas is called for hooking so Avs get their first power play of the night.

9:27 p.m.: GOAL! Jordan Kyrou with one-time shot off the 2 on 1. Great feed from Brayden Schenn to get the puck around a diving Manson to Kyrou. All starts with a turnover from Jack Johnson at the Blues’ blue line.

KYROU WHAT A GOAL pic.twitter.com/wGILZj0XtM

9:25 p.m.: Colorado is skating circles around St. Louis. Still 1-1 but the Blues have looked slow and sloppy.

9:19 p.m.: GOAL! Avalanche puck right up where they left off in the first and it results in a J.T. Compher goal. Excellent hip fake from Manson allows him to get a lane to the net, he shoots low and Compher roofs the rebound, 1-1- just over six minutes into the 2nd period.

8:53 p.m.: End of the first and the Blues have the lead. St. Louis was on its heels most of the period, but got the lone tally. Shots 13-8 in favor of Colorado.

8:51 p.m.: GOAL! Justin Faulk walks in from the point and whistles one by the right arm of Kuemper. Blues on the board first with a minute to go in the opening frame.

Justin Faulk has the @StLouisBlues on the board first 👀 #StanleyCup pic.twitter.com/y87jYjMEFN

8:46 p.m.: Nothing doing from the Blues on the man-advantage. Three minutes left in the first.

8:41 p.m.: Josh Manson whistled for interference. Hits two Blues player along the wall, but neither have the puck. Looks like he misread the pass. Blues to the PP.

8:33 p.m.: It’s all Avs early. Blues trying to slow them down with their physicality, but have given up a couple of grade-A chances. Husso has been on early.

8:29 p.m.: Avalanche with the better chances early on, but Husso with two pad saves. First is on a Cale Makar shot, then the second is a deflection by Nathan MacKinnon off a Makar shot that hit Husso’s right toe.

8:26 p.m.: Mikko Rantanen with a rebound chance, goes to the backhand but Husso gets the stop. Bad turnover by Justin Faulk leads to the puck staying in the St. Louis zone.

8:24 p.m.: More than five minutes in, slower start to this one. A couple of solid hits, including Brayden Schenn on Nicolas Aube-Kubel.

Game 6 starters for #GoAvsGo and #stlblues

What channel is Avalanche vs. Blues Game 6 on?

Game 6 of the second-round series between the Avs and Blues will be broadcast on TNT in the United States and Sportsnet in Canada.

The game can be live streamed on Watch TNT or Sling TV in the United States and SN Now in Canada.

Viewers in the U.S. can stream every NHL playoff game live on Sling TV. With the Sling Orange Sports Extra package, they get $10 off their first month now with access to ESPN, ESPN2, ESPN3, TNT and NBATV. NHL playoff games on ABC are simulcast on ESPN3, which is included with Sling Orange, available for $35 per month including $25 the first month for new subscribers.

What time does Avalanche vs. Blues Game 6 start?

Colorado and St. Louis go head-to-head in Game 6 on Friday, May 27. Puck drop will be shortly after 8 p.m. ET at Enterprise Center in St. Louis, Mo.