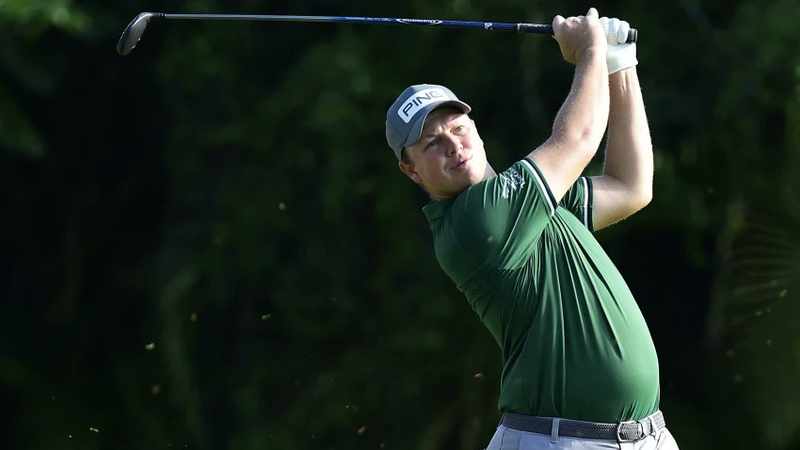 Daffue joins China’s Carl Yuan and South Korea’s Seonghyeon Kim as the only players to achieve #TOURBound status. Although Daffue has yet to win this season, the 33-year-old Pretoria, South Africa native has four top-four finishes, including a T2 at the LECOM Suncoast Classic, as well as seven top-25s in 13 starts.

“I barely got in the first event this season and I’ve locked (a PGA TOUR card) up 13 events in,” Daffue said following Sunday’s final round. “Just a year ago, I was Monday qualifying. Now I have my card.”

Daffue entered last week’s AdventHealth Championship, held at Blue Hills Country Club in Kansas City, Missouri, with 721 points and needing a solo-third or higher to surpass the 900-point threshold. Daffue reached 14-under par for the tournament and broke a tie for third with a birdie on the 71st hole, then solidified solo-third with a par on the 72nd hole.

“I didn’t really feel anything until the last one went in,” Daffue said Sunday. “It didn’t even kick in until I walked off the green. I can’t believe it.”

Daffue, who is in his first full season on the Korn Ferry Tour, turned professional out of Lamar University in 2012 but struggled to obtain status for the first seven years of his career. In the 2017 Korn Ferry Tour Qualifying Tournament, Daffue finished T138 at Final Stage, leaving him without any guaranteed starts for the 2018 season.

Daffue earned Korn Ferry Tour membership for the second time last fall, but a T50 at Final Stage of the 2021 Korn Ferry Tour Qualifying Tournament left him outside the top 40 by a single stroke, meaning he would not have guaranteed starts in 2022. After a battle with COVID-19 in January, Daffue was the seventh-to-last player in the field at the season-opening The Bahamas Great Exuma Classic at Sandals Emerald Bay, where he finished T15.

“There was a strange start to the year,” Daffue said earlier this season. “I got into Exuma and wasn’t really prepared. I didn’t touch a club for 12 days because I was really sick. When I went over there, I didn’t really have any expectations, top-15’d, and that set everything up.”

The most pivotal moment of Daffue’s season came in the fourth event, the Astara Golf Championship presented by Mastercard. Daffue finished T9 and not only skyrocketed up the reshuffle following the event, but also secured a spot in the next tournament, the LECOM Suncoast Classic, where he recorded a season-high T2 finish.

Without the top-10 aot the Astara Golf Championship in Bogota, Colombia – which Daffue secured with back-to-back birdies on the 71st and 72nd holes – he would not have earned a spot in the LECOM Suncoast Classic, as no players from the reshuffle category gained entry into the field.