Tank Davis wants Devin Haney next if he beats Kambosos 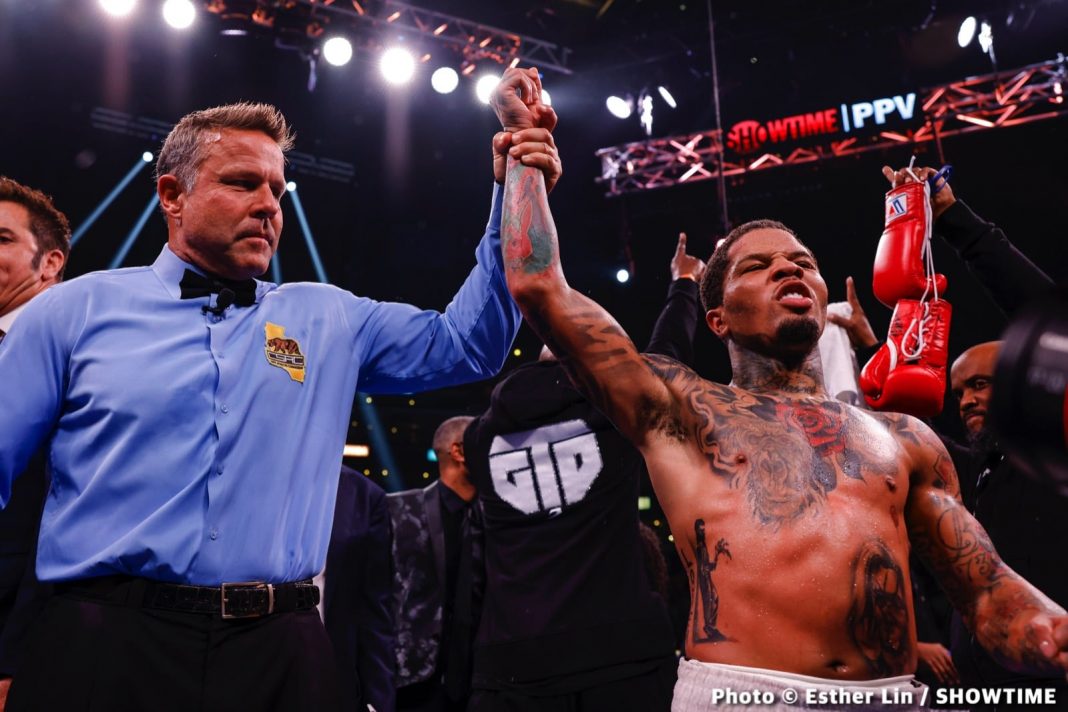 By Dan Ambrose:  Gervonta ‘Tank’ Davis got a little upset in learning this week that Devin Haney took a shot at him in a recent interview in saying he might as well stay with Mayweather Promotions if he’s not going to be fighting anybody.

Tank’s promotional contract with Mayweather Promotions is expiring with his fight this Saturday night against Rolando ‘Rolly’ Romero, and he says he’s moving on.

With WBC light heavyweight champion Haney (27-0, 15 KOs) saying that Tank should stay with Floyd Mayweather Jr, he now wants to fight him next if they both win their next fights.

There won’t be any promoter holding Tank Davis back from fighting Haney if he picks up the four belts against Kambosos next month. The only problem is that Kambosos has a rematch clause in the contract, so Haney will need to fight him again before he can face Gervonta.

“He’s an email champ. He’s fighting because someone mailed him the belt,” said Tank Davis to the Last Stand Podcast when told that Devin Haney said he should stay with Mayweather if he’s not going to be fighting anybody good afterward.

“Did that ever happen in boxing before? And he’s talking crazy. Like, come on. If you win, I’m now out of my contract; let’s make the fight happen since you want to talk crazy. Let’s do that; I want to fight you if you win, Devin Haney,” said Tank.

If Haney beats Kambosos Jr twice, Ryan Garcia might try and take the fight against him right out from under the nose of Tank Davis. Haney would likely prefer the Ryan fight because he’s got over 9 million followers on social media.

“I don’t even know,” said Gervonta when asked to make a prediction on the George Kambosos Jr. vs. Devin Haney fight. “The winner needs to come see me.

“Devin, if you pay attention to him, everything he do, he watch me. You keep doing all this barking, but y’all want to be me.

“Its all good. We know how to tame that,” said Tank when told that Rolly said he’s a stupid fighter, and that he’s going to knock him out in the first round.

“It’s not personal. That’s why you don’t see me mad. I’m just messing around,” said Tank about it not being personal with him against Rolly.