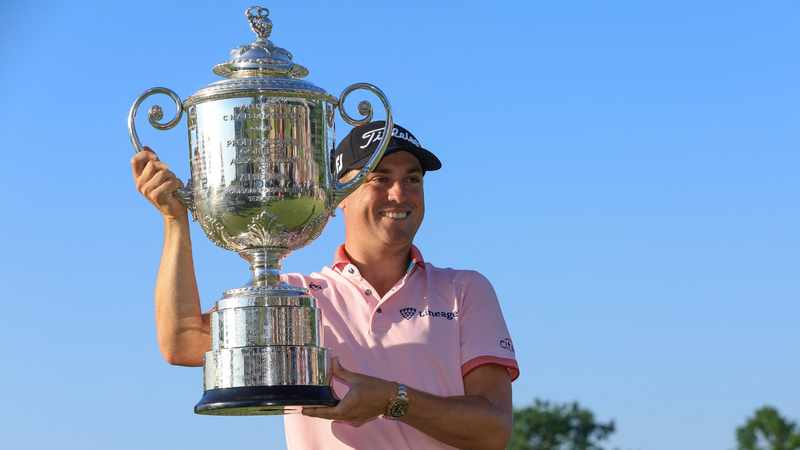 Tulsa, Oklahoma – A pep talk from his caddy made all the difference for Justin Thomas as he collected his second major title after staging an incredible comeback to win the PGA Championship on Sunday.

The American was seven shots back at the start of the final round in Tulsa but clawed his way up the leaderboard before besting compatriot Will Zalatoris in a three-hole playoff.

Thomas, who also won the tournament in 2017, said his caddy Jim “Bones” Mackay had put him back on track after carding a frustrating four-over 74 in the Saturday’s third round.

“I’m fully confident in saying that I wouldn’t be standing here if he didn’t give me that — wasn’t necessarily a speech, but a talk, if you will,” said Thomas.

“I felt like I’d played terrible. And he was just like, ‘Dude, you’ve got to be stop being so hard on yourself. You’re in contention every single week we’re playing.'”

The 15-time PGA Tour winner has had Mackay, who caddied for 2021 winner Phil Mickelson for 25 years, on the bag since September and had six top-10 finishes in 2022 heading to Southern Hills Country Club.

Thomas told reporters he was able to tune out the raucous crowds and avoid looking at the leaderboard on Sunday.

“You don’t have to be perfect. Just don’t be hard on yourself. Just kind of let stuff happen, and everything is trending in the right direction. So just keep staying positive so that good stuff can happen,” he said.

“There’s not very many times after shooting 4-over on Saturday of a major I left in as good a frame of mind as I have.”