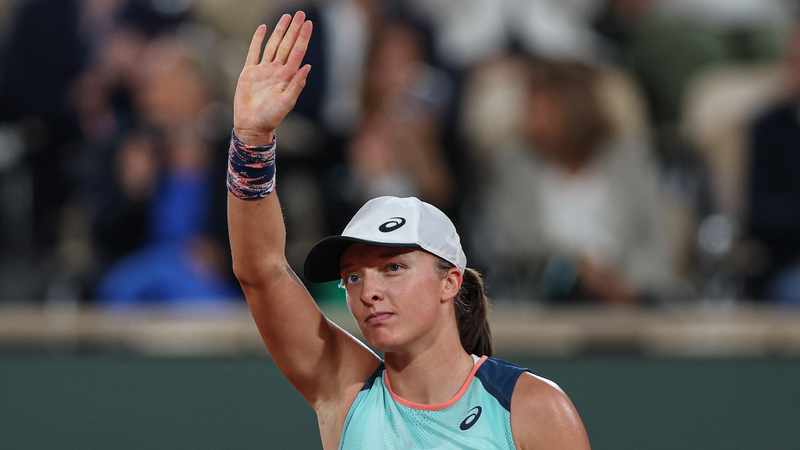 Paris — Former world number one Naomi Osaka and defending champion Barbora Krejcikova lost in the first round of the French Open on Monday, while women’s title favourite Iga Swiatek stretched her winning streak to 29 matches.

The unseeded Osaka, a four-time Grand Slam champion, was knocked out 7-5, 6-4 by Amanda Anisimova — the same player who ended the Japanese star’s title defence at the Australian Open this year.

An error-plagued Osaka served up eight double faults and committed 29 unforced errors on her return to Roland Garros, after withdrawing in 2021 when she refused to honour mandatory media commitments before revealing she had been suffering from depression.

“I thought I tried really hard, and I just feel like it was a bit unfortunate because I wasn’t able to play as many matches leading into this tournament,” said Osaka.

Anisimova, the 27th seed, reached the semi-finals in Paris three years ago.

“It’s tough to see Naomi Osaka in the first round so I knew it wouldn’t be easy,” said the American.

“I knew I had to play my best tennis and the conditions were not easy.”

As rain stopped on the outside courts for two hours, Krejcikova followed Osaka in making an early exit, going down 1-6, 6-2, 6-3 to 19-year-old Frenchwoman Diane Parry in her first match since February following injury.

The Czech world number two had yet to play on clay this season after being sidelined by an elbow problem.

“It’s really a dream for me,” said Parry, spurred on by the home support under the roof on Court Philippe Chatrier.

With Krejcikova, Osaka and Madrid champion Ons Jabeur all going out in round one, Swiatek required just 54 minutes to dispatch Ukrainian qualifier Lesia Tsurenko 6-2, 6-0.

The 20-year-old Swiatek, who took over as world number one following Ashleigh Barty’s shock retirement, has won her last five tournaments and is bidding for a second French Open in three attempts.

“I love playing here even though the last couple of days it’s been raining and pretty dark.”

Swiatek is unbeaten since February and has the longest winning streak on the WTA tour since Serena Williams won 34 matches in a row in 2013.

“I’m pretty sure that it can end, but I just want to keep going. I’m sure someday my streak will stop.”

Djokovic plays Yoshihito Nishioka of Japan in the first of 10 night sessions — introduced at Roland Garros last year when a pandemic curfew saw most late matches played in front of empty stands.

It is the world number one’s first Grand Slam match since his high-profile deportation from Australia. He won his first title of the year at the Italian Open earlier this month.

“I feel I am always in that contention to fight for any Grand Slam trophy,” said Djokovic, who is seeded to meet Nadal in the quarter-finals and Spanish teenage sensation Carlos Alcaraz in the last four.

Djokovic’s last match at a major was his loss to Daniil Medvedev in last year’s US Open final, a defeat which denied the Serb a calendar Grand Slam.

Nadal has yet to win a title on his beloved clay this season, but played down concerns over the chronic foot issue that resurfaced in Rome.

“There is nothing to recover,” said Nadal, who faces Australia’s Jordan Thompson.

“I was suffering after that for a couple of days, but I feel better. That’s why I’m here.”

Nadal began the year with a 20-match winning run, capturing a second Australian Open title to claim a record 21st Grand Slam and move ahead of Djokovic and Roger Federer.

The 35-year-old’s record at the French Open stands at a staggering 105 wins and just three losses since his 2005 title-winning debut.

Djokovic has been responsible for two of those defeats. One came in the bruising semi-final 12 months ago, the most recent clash of the pair’s epic 58-match rivalry.