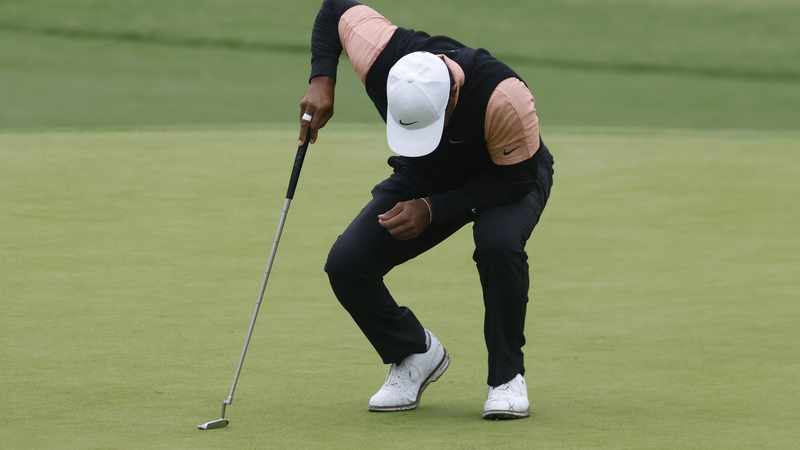 Tulsa – Tiger Woods withdrew from the PGA Championship after limping to a nine-over par 79 in Saturday’s third round, his remarkable comeback from severe leg injuries succumbing to a painful reality.

Woods withdrew from a major for the first time as a professional and only the second time ever following the 1995 US Open.

After struggling to the third-worst major round of his career with pain in his surgically repaired right leg, the 15-time major winner would not commit to playing Sunday’s final round at Southern Hills.

It didn’t go well, and just after the round was completed, Woods let organizers know he was done.

“We admire Tiger’s valiant effort to compete here at Southern Hills and wish him the best as he continues to recover from his injuries,” said PGA of America president Jim Richerson.

Chile’s Mito Pereira fired a one-under-par 69 to stand on nine-under 211 after 54 holes with a three-stroke lead over England’s Matthew Fitzpatrick and American Will Zalatoris.

But the spotlight was on Woods as it had been all week at Southern Hills.

But he made an emotional return 14 months after the accident to finish 47th at last month’s Masters, his major feat being to walk 72 holes at hilly Augusta National while huge crowds of spectators cheered him at every hole.

Woods made five consecutive bogeys at a major for the first time in his career from the ninth through 13th holes and stood on 12-over 222 after 54 holes when he pulled the plug.

“I didn’t do anything right,” Woods said. “I didn’t hit many good shots. Consequently I ended up with a pretty high score.”

After struggling to his worst Masters rounds with weekend 78s, Woods again could not follow the effort to make a cut in Tulsa with a solid round.

Woods struggled to his worst-ever score in 79 PGA Championship rounds and his only worse major scores were a 10-over 81 in the third round of the 2002 British Open and a 10-over 80 in the first round of the 2015 US Open.

“I just didn’t play well,” Woods said. “I didn’t hit the ball very well and got off to not the start I needed to get off to.”

When Woods withdrew from his prior major 27 years ago, he was a 19-year-old amateur in his US Open debut at Shinnecock who hurt his wrist trying to blast the ball out of thick, tall grass.

He requires ice baths and physical therapy between rounds to enable his right leg — held together by rods, plates, screws and pins — to have the strength to walk the 7,556-yard course.

At the first hole Saturday, Woods sank a 13-foot par putt but then found water off the second tee on the way to a bogey and lipped out a five-foot birdie putt at the fourth.

“I thought I hit a good tee shot down two and ended up in the water, and just never really got any kind of momentum on my side,” Woods said.

After another tee-shot splashdown at the sixth, Woods hit into greenside rough and needed three to get down for triple bogey, then missed a six-foot putt to bogey the seventh.

At nine, Woods embedded a ball in bunker-side grass blasting out of the sand and needed an eight-foot putt to salvage bogey and a six-over 41 on the front nine.

That began his run of five bogeys in a row, errant tee shots costing him time and again.

“I couldn’t get off the bogey train there,” Woods said.

Woods sank a 36-foot putt at the par-4 15th for his only birdie of the day and closed with three pars.

South African Shaun Norris, who played alongside Woods on Saturday, was amazed at the legend’s pain tolerance.

“To show the amount of guts he has got, to actually push through it and even make the cut this week, is phenomenal,” Norris said.

“He grinds through everything and pushes himself, even all the pain. It’s not easy to see a guy like him have to go through that and struggle like that.”