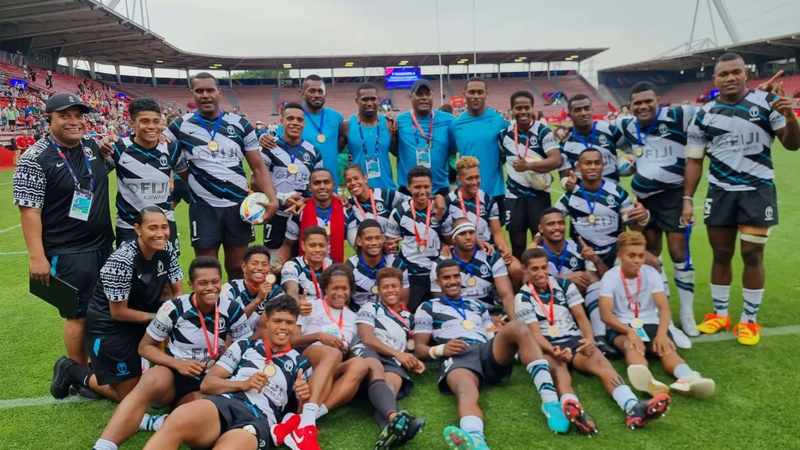 Ireland had made the final following an opening day that saw Argentina and Australia knocked out in the quarter-finals, while Series leaders South Africa and heavyweights New Zealand failed to even make the knockout stages.

It was left up to Fiji, winners in Singapore and runners-up last time out in Vancouver after a disappointing start to the series, to fly the flag for the big guns.

The offload and finish 🤌

The writing looked like it might have been on the wall for Ireland when Fiji’s Tevita Dagunu went over for a first-minute try converted by Napolioni Bolaca.

But the Irish hit back with quick-fire tries from Jordan Conroy and Terry Kennedy, Mark Roche bagging one conversion.

Fiji made it 14-12 at half-time, however, as Bolaca notched up his side’s second five-pointer, Waisea Nacuqu converting.

The Irish, who earned a first-ever win over Series leaders South Africa in Saturday’s opening game, were then put to the sword by the double Olympic champions.

Josua Vakurunabili, Elia Canakaivata and Kaminieli Rasaku crossed for a hat-trick of tries in quick succession.

Conroy bagged a late second try, but that was small consolation in the face of a consummate Fijian performance.

“Teamwork in defence and attack was what this victory was built on,” Dagunu said. “We kept the ball well and stuck to our game plan.

“To all the Fijians around the globe, this win is for you.”

Hosts France beat Samoa 17-12 in the third-place play-off, Jonathan Laugel scoring the decisive try after the game went into extra-time.

There was no repeat of the two minutes of suspended pool play between the two same teams that has drawn widespread criticism.

When England’s Tom Homer broke clear and crossed over the Argentinian tryline, he didn’t immediately dot the ball down, instead taking advice to kill time in the in-goal area.

No Argentinian player came close to him as the Pumas won the game 19-7, with the result meaning both sides progressed at Canada’s expense on points difference.

Rugby said the incident, which was roundly booed, was “Unique. Bizarre. Controversial.”

Former Welsh referee Nigel Owens, well known for his upholding of the ‘values’ of rugby, told WalesOnline: “Nobody wants to see something like that in the game. The referee has it in his armoury to impose a sanction if he feels an action amounts to ungentlemanly conduct and is against the spirit of the game.

“I don’t think this is good for the game. A player or team must not do anything that is against the spirit of the game. I’m surprised the referee didn’t tell him to ground the ball.”

The men now have a quick turnaround, back in action in London between May 28-29.

The nine-leg series wraps up in Los Angeles between August 27-28.

Australia were confirmed as champions of the six-leg women’s series despite going down 21-14 to arch-rivals New Zealand in the final in Toulouse.

Kelly Brazier crossed for the winning try to seal victory for the Black Ferns, playing just their second tournament of the season.