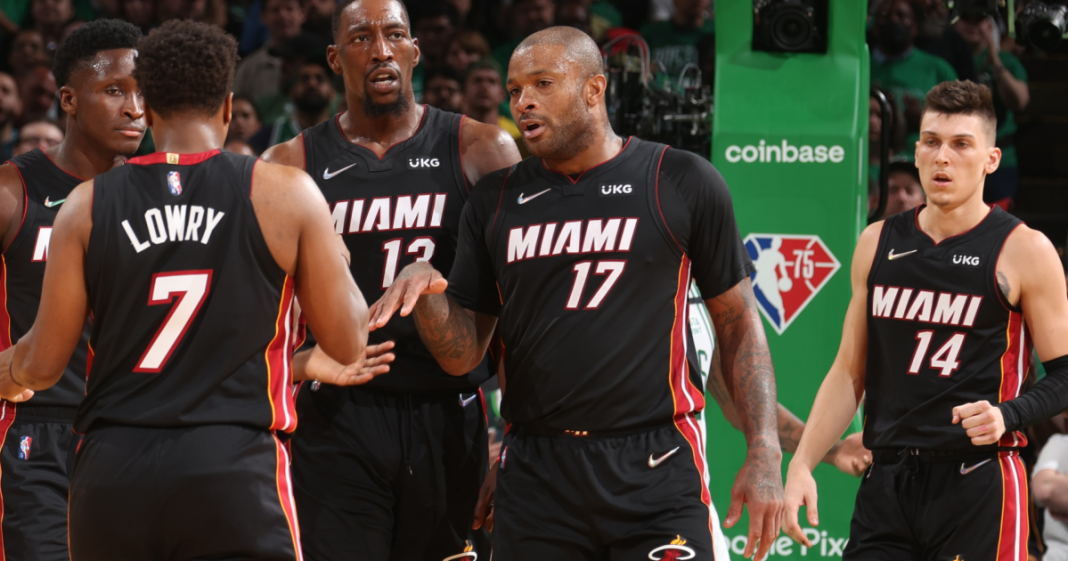 The Miami Heat held off a furious second-half comeback from the Boston Celtics to secure a 109-103 win at TD Garden.

Bam Adebayo bounced back in style, pouring in 31 points, 10 rebounds, six assists and four steals to give the Heat a 2-1 series lead.

After leading by as many as 26 points, the Heat saw their lead cut to just one point late in the fourth quarter, before clamping down on defense to seal the win.

Jimmy Butler exited the game at half-time due to right knee inflammation, but there is optimism he will not miss any games.

Jaylen Brown carried the Celtics offense on the night, going off for 40 points and nine rebounds, with Boston dealing with injuries to Marcus Smart and Jayson Tatum.

Both Smart (ankle) and Tatum (shoulder) went back to the locker room hurt, before returning to the game.

The Sporting News tracked all of the action from Game 3 below.

MORE: How every remaining NBA Playoff team is linked to Larry Bird

11:18 p.m.— That’s game for the Heat. After the Celtics go to within six points with 40 seconds remaining, free throws from Oladipo and Tucker, plus an Adebayo dunk shut the door on Game 3.

11:04 p.m. — Victor Oladipo has made a huge impact on the game in place of Butler, setting the tone for Miami on the defensive end.

11:01 p.m. — The turnovers continue to plague the Celtics as they give the Heat another easy possession. Miami has now scored 31 points off 23 Boston turnovers.

🚨 JAYLEN BROWN MAKES IT A ONE POINT GAME 🚨#NBAConferenceFinals presented by Google Pixel on ABC pic.twitter.com/9NT1SODLED

10:59 p.m. — Now Jayson Tatum has returned to the Celtics bench. He checks back into the game with 3:40 remaining.

10:58 p.m. — Jaylen Brown is willing the Celtics back into the contest, making it a five-point game with five minutes remaining. Here we go!

10:51 p.m. — The injuries are piling up in this game, with Jayson Tatum now back in the locker room.

Tatum went down, grabbing his shoulder after a collision with Victor Oladipo.

Jayson Tatum is injured and headed to the locker room pic.twitter.com/Xr4mgOcq03

10:45 p.m. — Ime Udoka successfully challenges a foul call on Grant Williams, to keep him in the game with four fouls.

The Celtics go into the final frame trailing by 15 points. Jaylen Brown leads the Celtics with 26 points heading into the fourth quarter, while Al Horford has a 20-point, 10-rebounds double-double.

10:18 p.m. — Here come the Celtics! Al Horford’s triple brings Boston to within single digits for the first time since three minutes into the game.

Marcus Smart checks back in and hits a HUGE 3 for the @celtics!

Boston is on a 11-3 run ☘#NBAConferenceFinals presented by Google Pixel on ABC pic.twitter.com/Tstr2sxQZi

10:10 p.m. — And just like that Smart is BACK! Despite spraining his right ankle, he returns to the game.

10:01 p.m. — Marcus Smart is helped to the locker room after appearing to injure his ankle in a collision with Kyle Lowry.

9:59 p.m. — A big blow for the Heat as Jimmy Butler will not return for the remainder of the game due to right knee inflammation.

Miami Heat say Jimmy Butler is out for the rest of the game with knee inflammation.

The @celtics end the half on an 8-0 run!#NBAConferenceFinals presented by Google Pixel on ABC pic.twitter.com/J9Sh6JXtG7

9:34 p.m. — This is looking like the Bam Adebayo game! The big man has as many points tonight as he had in the first two games combined. He leads Miami with 16 points and six assists.

Kyle got it to fall pic.twitter.com/S4QxI6J1FN

9:26 p.m. — The frustration continues for Boston as Jayson Tatum is called for an offensive foul. His second foul of the game.

9:14 p.m. — The second quarter starts the same as the first — Miami’s defense is putting up a wall and contesting everything. Despite Boston’s crisp ball movement, the help defenders are arriving on time and forcing turnovers and misses.

The Heat raced out of the gates to take a 21-point lead at the first break, behind a huge first quarter from Baam Adebayo (12 points, two rebounds). Jaylen Brown leads the Celtics with 11 of their 18 points.

9:07 p.m. — Adebayo continues to take advantage of the absence of Robert Williams III, getting to the rim again and again. Boston has to find a way to keep him out of the paint.

9:03 p.m — ESPN’s Malika Andrews reported on the broadcast that Lowry’s return to the locker room is to aid the management of his hamstring injury, using the stationary bike and stretching, something he’ll continue to do throughout the game.

8:54 p.m. — Gabe Vincent checks into the game as Kyle Lowry heads back to the locker room. It’s unclear if he picked up an injury. We’ll continue to monitor the situation.

8:52 p.m. — After a quiet outing in Game 2 (six points), Bam Adebayo has been much more aggressive in Boston, attacking his matchup in the paint with Al Horford. He’s up to eight points midway through Q1.

8:42 p.m. — We’re underway in Boston as Max Strus drills the triple to open the scoring.

QB1 back in action.

What channel is Celtics vs. Heat on?

Game 3 of the Eastern Conference Finals will air on ABC. Viewers can also stream Game 3 on Watch ESPN or Sling TV.

Viewers in the U.S. can stream every NBA Playoff game live on SLING TV. With the SLING Orange Sports Extra package, get $10 off your first month now with access to ESPN, ESPN2, ESPN3, TNT and NBATV. NBA Playoff games on ABC are simulcast on ESPN3, which is included with SLING Orange, available for $35 per month including $25 the first month for new subscribers.

MORE: Watch the NBA Playoffs on Sling TV (U.S. only)

Game 3 of the Eastern Conference Finals will tip off around 8:30 p.m. ET on Saturday, May 21. The game will be played at TD Garden in Boston.

Here is the full schedule for the 2022 Eastern Conference Finals.