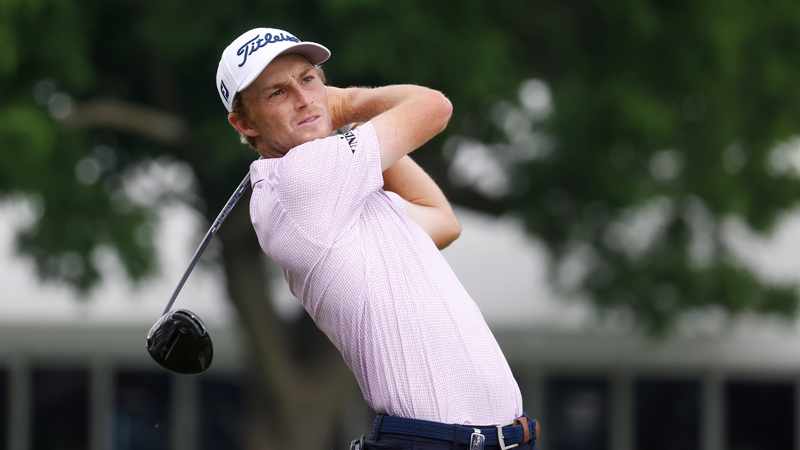 Tulsa – American Will Zalatoris fired a bogey-free five-under-par 65 to seize a one-stroke lead after Friday’s second round of the PGA Championship while Tiger Woods battled his way into the weekend.

Aided when gusting winds vanished in the afternoon at daunting Southern Hills, late-starter Zalatoris reeled off three back-nine birdies in a row and sank a seven-foot birdie putt at the 17th to finish 36 holes at Southern Hills on 9-under-par 131.

“I had the luck of the draw. There wasn’t any wind after the 11th hole,” Zalatoris said. “I made the most of it with some good shotmaking.”

That enabled 30th-ranked Zalatoris, last year’s Masters runner-up and the 2021 US PGA Tour Rookie of the Year, to grab a one-stroke lead over Chile’s Mito Pereira, who fired a 64 to stand second on 132.

“I guess shooting six-under wasn’t really the expectation, but here we are,” the 27-year-old from Santiago said. “Not going to change anything.”

The most beautiful shotmaking came from two-time Masters winner Bubba Watson, who matched the course record with a seven-under par 63 that included nine birdies, his most in any major round.

“It’s very nice. Don’t get me wrong. It’s an honor to be able to shoot 63 on any golf course. I’ll take it,” Watson said. “But I’ve got to look forward to tomorrow and see where I’m at and hit hopefully just as quality shots as I did today.”

Watson was fourth on 135, one stroke behind 2017 PGA winner Justin Thomas, who played in the most brutal of winds, and one stroke ahead of Rory McIlroy, the 18-hole leader who battled to a 71 to share fifth on 136 with American Davis Riley and Mexico’s Abraham Ancer.

“There’s a long way to go,” said McIlroy, expecting a change in wind direction for the weekend. “We’re going to see a completely different course. Everyone is going to have to adapt.”

Watson only missed matching the all-time low major round of 62 when he missed a 23-foot birdie putt at the 18.

47 seconds to get you ready for the next 36 holes.#PGAChamp pic.twitter.com/Jh1JNiO9Io

“I gave it a chance,” Watson said. “But I didn’t want to three-putt so I didn’t give it too much of a chance.”

Zalatoris, who has four top-10 finishes in seven major starts, began his birdie blitz at the par-3 11th and made every putt he had inside 10 feet.

“Kept the momentum going with some good putts,” he said. “Really pleased.”

number 100 Pereira, who missed the cut at the 2019 US Open in his only prior major start, took full advange of diminished afternoon wind to make seven birdies against a lone bogey.

“It was lucky to get that draw,” Pereira said. “I’ve had good days and bad days but everything I’ve experiencd has helped me to get here and play good golf,” Pereira said.

“Very pleased,” Thomas said. “I stayed very patient… and I’m glad to have a good round to show for it.”

The biggest crowds, however, followed Woods, the 15-time major winner in his second comeback event after sharing 47th at the Masters last month, when walking 72 holes was an achievement.

“Hopefully this weekend I get a hot weekend, some tough conditions and you never know,” Woods said. “The mission is to go ahead and win this thing somehow.”

Woods struggled to a 74 on Thursday and for most of the Friday was flirting with the cut line as he battled alongside McIlroy, the 18-hole leader with an opening 65, and Jordan Spieth, trying to complete a career Grand Slam.

The world’s three top-ranked golfers were grouped in a major for the first time since the 2013 US Open but all were over par overall.

Bubba was in vintage form during Round 2. Tying the tournament record 63. 👀#PGAChamp pic.twitter.com/RHx6Ej18JR

Spain’s second-ranked Jon Rahm, the reigning US Open champion from Spain who could return to number one with a victory, shot 69 to stand on 142.

Top-ranked Masters champion Scottie Scheffler, who has won four of his past eight starts, fired a 75 to miss the cut on 146 with two-time major winner Dustin Johnson.