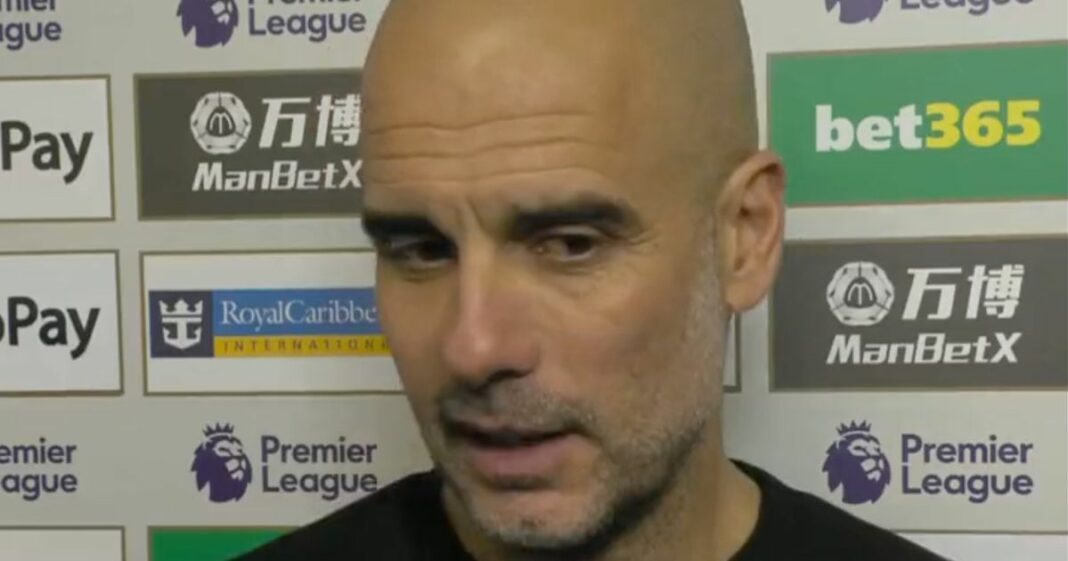 Manchester City boss Pep Guardiola has issued a scathing response to criticism of his players from former footballers Patrice Evra and Dimitar Berbatov.

The former Manchester United duo had made the comments questioning City’s mentality under Guardiola following the manner of their Champions League semi-final defeat against Real Madrid. City led the game 5-3 on aggregate going into injury time of the second leg but Rodrygo Goes scored twice inside the space of 84 seconds to send the game into extra time, before Karim Benzema’s penalty gave Madrid victory after extra time.

Evra made the suggestion that Guardiola did not want “leaders” or “personality” in his side because that is how he builds his side, despite the fact that they are on course to secure their fourth Premier League title in five seasons.

Speaking earlier this month, Evra said: “ Manchester City needs leaders, but Guardiola doesn’t want leaders. He doesn’t want personality. He’s the leader. That’s why when they’re in trouble they don’t want to… they don’t have anyone on the pitch to help them. He chooses his teams like that, he can’t train people with personality. He did it at Barcelona, but he builds his team to control everyone. When things go wrong, he always decides.

“City have made a mistake, it’s the truth. They are traumatised. They remind me of PSG — they are clubs based on money. Real Madrid also has money, but it has a story behind it; Manchester City only has money and the players go to play there solely for that. Then they win trophies, of course, but a player chooses to go to Manchester City only because it offers you more.”

Evra’s former United teammate Berbatov told Betfair when explaining City’s exit: “I don’t have an explanation about what happened to Man City against Real Madrid, they reminded me of Bayern Munich in 1999 against Man United.

Have Your Say! Were Evra and Berbatov fair on their criticism of Man City? Tell us what you think here.

“It was exactly the same, two goals in the final minutes. If a small team, who don’t have that much talent and class concede two goals at the end of the game, we’ll say it’s because they are a small team with a small mindset and with no winning mentality.

“With it happening to a team like Man City, I don’t even know how to find the right words to explain how this team of all teams, with so many winners, can let in two goals after the 90 minutes in a Champions League semi-final. Yes, they were playing Real Madrid and you can argue that they are a big team with big players, but come on, in the last minute of the game.

“They had to be more concentrated and focused, they should know how to hold that result. I don’t think it’s a mentality issue for City, it’s unexplainable. Sometimes you have games like this where you have a great team full of talent, class and champions. Unexpectedly they let goals in during the final moment of the game.”

Guardiola hit back at the comments on Friday during his press conference: “Our wins are the same characters and personalities that have been winning as those that lost in Real Madrid. You see these former players who become specialists like Berbatov and (Clarence) Seedorf and Patrice Evra – these type of players who were there and who I faced.

“I didn’t see this kind of character and personality when we played them, when we destroyed them, with Barcelona in the Champions League final against United.”

Guardiola was referencing his Barcelona side defeating United – of which Evra and Berbatov were part of the squads – in the Champions League finals of both 2009 and 2011, when the Catalan side won 2-0 and 3-1 respectively.