Joy for Bangladesh's first Test hundred against the Proteas 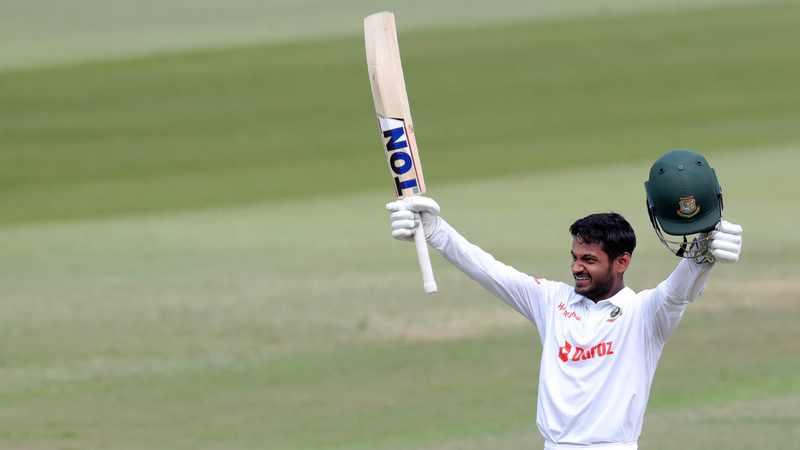 Johannesburg — Mahmudul Hasan Joy made more history for Bangladesh on Saturday becoming the first player from that country to make a Test hundred against the Proteas.

The 21 year old right hand opener, who had withstood the storm from the South African spinners on Friday afternoon and seen off two new balls, cut Keshav Maharaj behind point, and sprinted back for a second run, before jumping in the air, and celebrated another massive achievement for the Tigers on this tour. His teammates all stood to applaud him, not just for reaching three figures, but also for keeping them in touch with South Africa in the first Test.

At tea, Bangladesh were 257/7 having reduced South Africa’s lead to 110 runs. Joy was on 106 while Mehidy Hasan had scored 24 with the pair’s partnership worth 41 runs.

Joy had shown extreme patience especially Friday when he just blocked the spinners. On Saturday there was more aggression, particularly in Simon Harmer’s first spell, with Joy hitting him for a couple of boundaries and a six.

After lunch he accumulated in steady fashion again and while there were a few half chances offered, South Africa found his defence impregnable.

His partnership of 82 for the sixth wicket with Litton Das was ended two balls after the lunch break when Das was bowled by an in-ducker from Lizaad Williams that kept a bit low. Das had made 41.

Yasir Ali made a breezy 22 before an awful mix up with Joy saw him run out attempting a second run that Joy was only briefly interested in.

Harmer and Maharaj struggled to be as effective on Saturday as they had been Friday, especially with the Bangladeshis being more assertive against Harmer. Maharaj has looked the likelier to get a wicket of the pair, but has been unfortunate not to find the edge or in one instance have the ball fly passed the short-leg fielder.

Joy has faced 295 balls, and hit 10 fours and a six and his innings will certainly be celebrated in Bangladesh. The previous best score by a Bangladeshi batter against South Africa was the current captain Mominul Haque’s 77, which came in Potchefstroom five years ago.

Bangladesh, have already made history on this tour by winning the One-Day series and have put up a magnificent fight over the first two and half days of the first Test despite a poor first session on the opening morning and then seeing South Africa’s last two wickets share partnerships totalling 69 runs in the first innings.

Those runs are becoming increasingly valuable now, and if the tourists can eat into the lead further it will not only frustrate the Proteas more, but leave them very concerned as they try and push for an important win in the opening match of the series.