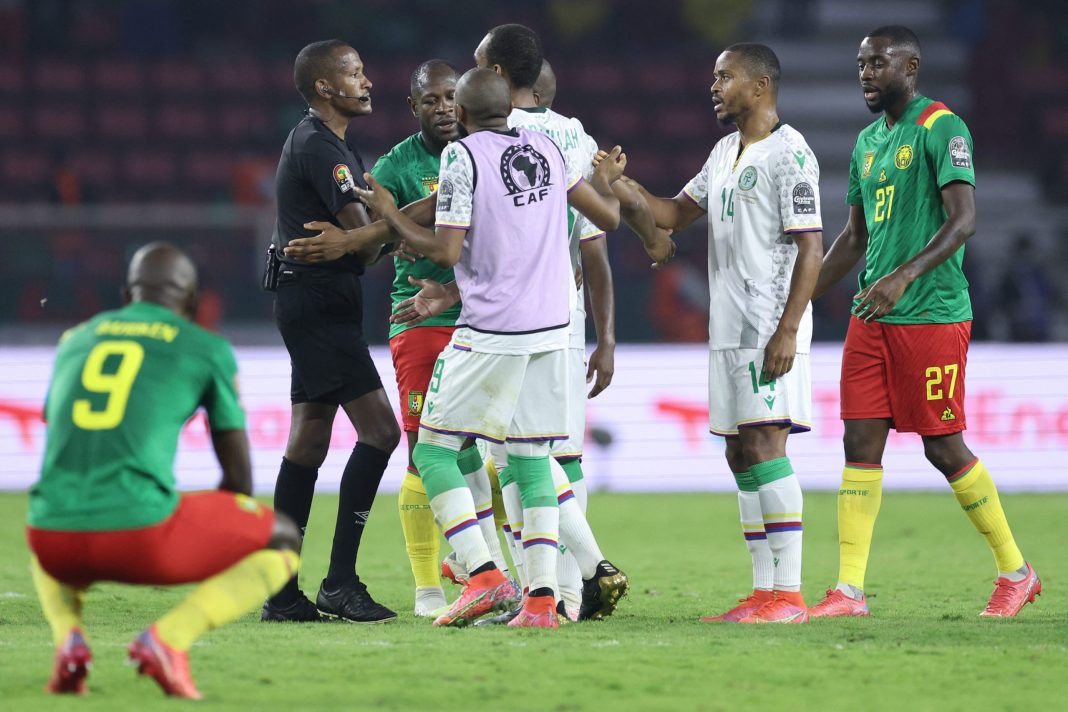 Hosts Cameroon set up an Africa Cup of Nations quarter-final against Gambia but only after labouring to a 2-1 win over a Comoros side who were forced to start an outfield player in goal and played most of Monday’s game with 10 men.

Left-back Chaker Alhadhur started between the posts for Comoros in Yaounde after two of their three goalkeepers were ruled out due to Covid-19 while the other was missing due to injury.

They then had captain Nadjim Abdou sent off after just seven minutes, and Karl Toko-Ekambi put Cameroon in front before skipper Vincent Aboubakar netted his sixth goal of the tournament.

Despite that, it was a heroic performance from the Comoros, who kept the last-16 tie alive until the end thanks to Youssouf M’Changama’s stunning late free-kick.

“I don’t think I am the only hero. I did what I could. I think I gave hope to the team and they all tried to help me,” Alhadhur, usually a back-up left-back for French Ligue 2 side Ajaccio, told broadcaster Canal Plus.

He had to use tape to mark out his number three on the back of his goalkeeper’s jersey.

Of being chosen to go in goal he added: “It was something that at first we spoke a bit about and laughed about, but then it became serious.

“I was chosen but I didn’t believe it until I put on the gloves and the top. Then I realised it was serious. There were lots of emotions going through my head but then I just got on with it.”

The tiny Indian Ocean island nation qualified for the last 16 in their first-ever appearance at the Cup of Nations after finishing as one of the best third-placed teams in the group stage.

However, their dream turned into a nightmare as a total of 12 players and staff tested positive for Covid-19 two days before the tie, including goalkeepers Ali Ahamada and Moyadh Ousseini.

Their other goalkeeper, Salim Ben Boina, was injured but they had hoped Ahamada would be able to start after he tested negative on the day of the game.

The 30-year-old Ahamada flew from Garoua, where he had been isolated, to Yaounde on Monday afternoon in the hope of being able to play, only for the Confederation of African Football (CAF) to decide otherwise as his positive result had come just two days earlier.

The islanders, whose coach Amir Abdou was among those missing after testing positive, had their skipper harshly sent off following a VAR review for a foul on Moumi Ngamaleu but they never gave up.

– Sickness bug doesn’t stop Gambians –
Nevertheless, it is the Indomitable Lions who keep their dream of winning the Cup of Nations on home soil alive as they advance to a last-eight tie in Douala against Gambia on Saturday.

Like Comoros, a Gambia side ranked 150th in the world are appearing at their first-ever AFCON but they upset the odds to beat Guinea 1-0 in the western city of Bafoussam earlier on Monday thanks to a terrific second-half strike by Bologna’s Musa Barrow.

Gambia then held on with 10 men at the end after Yusupha Njie was sent off, as Guinea hit the woodwork twice in quick succession in stoppage time.

The Guineans, deprived of suspended Liverpool midfielder Naby Keita, had Ibrahima Conte sent off at the death as they bow out.

Gambia’s achievement was all the more remarkable as coach Tom Saintfiet revealed the squad was affected by food poisoning during the night.

“We didn’t have a good feeling about today because many of us had food poisoning, including me. I didn’t sleep and was up at the toilet all the time, vomiting and with diarrhoea,” he told Canal Plus.

The last-16 action continues on Tuesday as Senegal play Cape Verde in Bafoussam before Morocco take on Malawi in Yaounde.