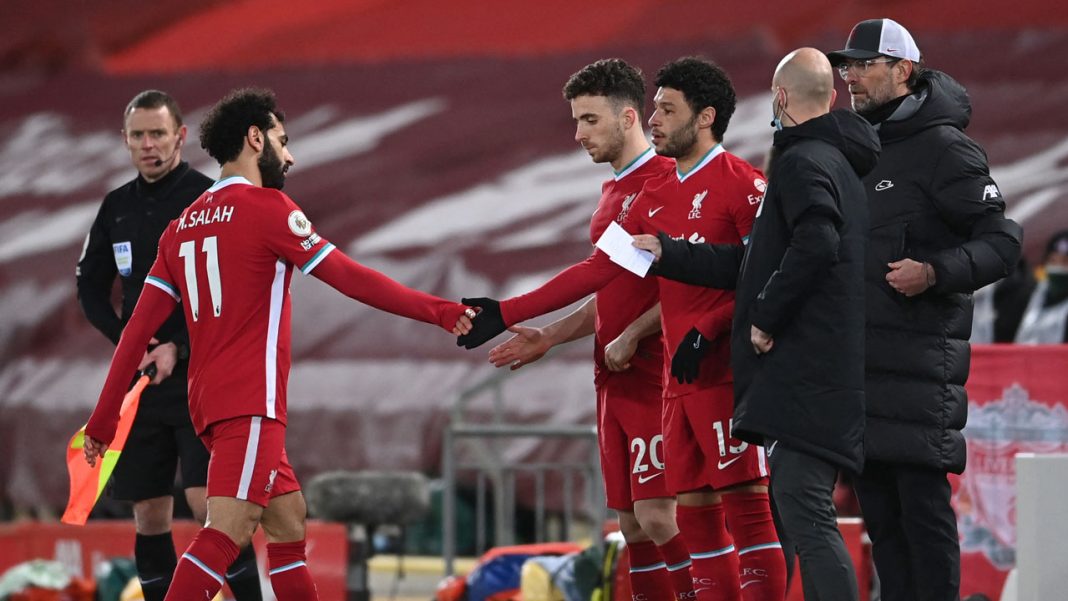 Mohamed Salah’s angry shake of the head after being substituted in Liverpool’s defeat to Chelsea was symbolic of the champions’ intense frustration as their season unravels.

Jurgen Klopp removed his top scorer just after the hour mark on Thursday but it did not prevent a 1-0 defeat and a fifth straight home loss for the first time in their history.

The wheels have come off quickly for Liverpool, who were crowned English champions last season for the first time since 1990.

As recently as mid-January, Klopp’s men were top of the league and in the title picture despite being hampered by a spate of injuries, most notably to central defender Virgil van Dijk.

Up until their shock 1-0 defeat to Burnley in January, they had not tasted defeat in the league at Anfield since April 2017.

But now they have a fight on their hands just to qualify for the top four — an unthinkable situation after winning the title last year by 18 points.

Liverpool have earned just 10 points from 11 Premier League games in 2021, with only West Brom, Newcastle and Southampton picking up fewer points since the turn of the year.

They are in seventh place in the Premier League and four points behind fourth-placed Chelsea ahead of Sunday’s match against lowly Fulham.

Blame game
Klopp played down Salah’s angry reaction after taking off the Egypt international as Liverpool trailed after Mason Mount’s goal late in the first half.

“When the boys look disappointed it is not a problem. I didn’t see what Mo did,” he said.

“The reason for the sub was that, and I could have changed other players as well that’s true, but he looked in that moment that he really felt the intensity and I didn’t want to risk him.”

Klopp took the blame for the lacklustre defeat, in which his side’s one shot on target was not registered until the 85th minute.

“These games are decided in moments and to get these moments back you have to fight and sometimes at a different level,” he said. “It’s not about tactics. It’s about being resilient and heart.

“We won’t blame the circumstances. There is only one person to criticise. That is me and us. That is what I told the boys.”

Liverpool have been hampered by long-term injuries to not just Van Dijk but his fellow central defenders Joe Gomez and Joel Matip, which have in turn destabilised the rest of the team.

But their world-class trio of attackers — Salah, Roberto Firmino and Sadio Mane have also lost their cut and thrust at an Anfield emptied of supporters by the coronavirus pandemic.

Liverpool have not scored from open play at home since late December, when Mane found the net against West Brom — a stark contrast to their swashbuckling form last season.

Left-back Andy Robertson urged his teammates to show some mettle in order to save their season.

“Too many heads are going down when we go 1-0 down, we can’t do that,” Robertson said. “Football is about taking knocks.

“We can’t rely on the past. Last season is over with, it is done. We have been nowhere near good enough to what a Liverpool team should be. We are dropping further and it is not good enough.”

Liverpool could start to turn it around against Fulham but Scott Parker’s men are battling for their Premier League lives.

The stark truth is that no game looks easy for Klopp’s men at the moment as they try to recapture the magic that has vanished.