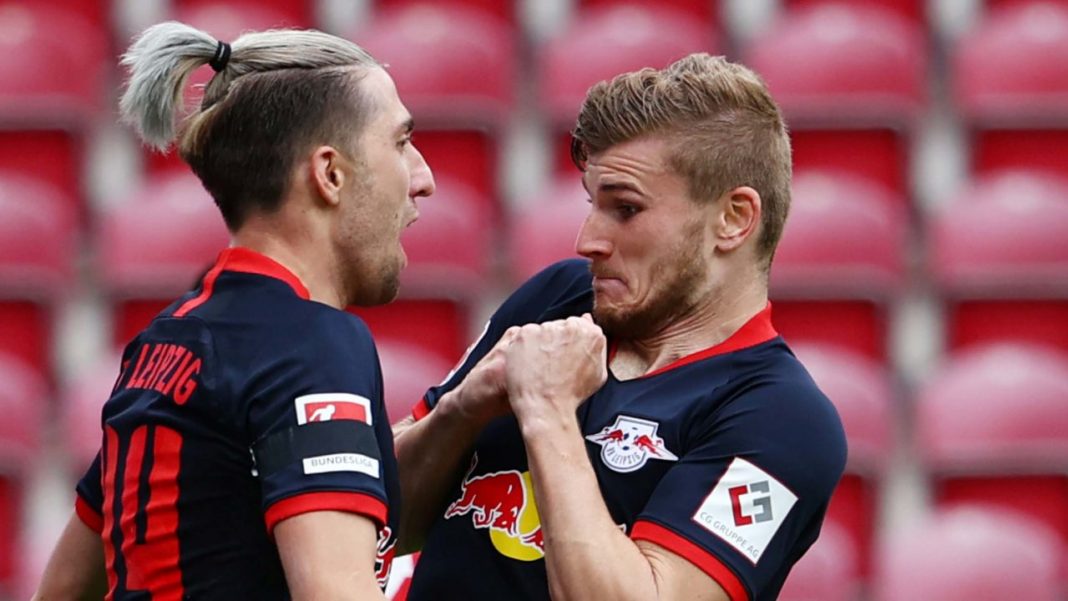 Sweet-toothed striker Timo Werner bagged a hat-trick as RB Leipzig thrashed Mainz 5-0 on Sunday to climb back to third in the Bundesliga and keep their dwindling title hopes just about alive.

When asked how he would celebrate, Werner, 24, told reporters “there will definitely be some sweets involved”.

Julian Nagelsmann’s side sit seven points behind leaders Bayern Munich ahead of the reigning champions’ top-of-the-table clash against second-placed Borussia Dortmund on Tuesday.

Leipzig bounced back from their draw with Freiburg last weekend in their first match since the coronavirus lockdown in style, with Werner moving to within three goals of Bayern’s Robert Lewandowski at the top of the league scoring charts.

Werner, who has been linked with several of Europe’s biggest clubs, has scored 24 Bundesliga goals this season including two trebles.

Lewandowski scored his 27th league goal this term in Bayern’s 5-2 win over Eintracht Frankfurt on Saturday.

Leipzig’s victory was the 10th win for a visiting team in 18 matches since the Bundesliga restarted in near-empty stadiums.

“We could have scored a few more, but no complaints — we’re very happy,” Leipzig sporting director Markus Kroesche told Sky.

Werner opened the scoring in only the 11th minute, before Yussuf Poulsen marked his 250th appearance for Leipzig by heading home a Marcel Sabitzer cross on 23 minutes.

The pair reversed roles for the third when Poulsen laid the ball off for Sabitzer to make it 3-0 at the break.

Werner grabbed his second goal three minutes into the second half when Kevin Kampl played him into the area.

The visitors were attacking at will when Kampl had a goal ruled out for offside soon after.

With 15 minutes left, Poulsen’s floated free-kick was met by Werner who volleyed past Mainz goalkeeper Florian Mueller to wrap up his hat-trick.

Earlier, Augsburg also eased to a comfortable away win with a 3-0 romp at Schalke.

Heiko Herrlich enjoyed a perfect first Bundesliga game on the touchline as Augsburg coach, a week after he missed their loss to Wolfsburg because he broke quarantine rules to buy toothpaste.

“We’ll be celebrating quietly, because we don’t have much time. But we have managed to turn things around.”

The 48-year-old Herrlich apologised to his squad after breaking a week-long coronavirus quarantine by leaving the team hotel — to buy toothpaste and skin cream — before the Wolfsburg match last weekend.

Having been as high as third last December, Schalke are winless in their last nine league games, including last Saturday’s 4-0 drubbing at Dortmund.

“We were extremely stupid at the start,” said Wagner.

Loewen gave the visitors the lead after just five minutes with a superb free-kick which flew into the top corner from 30 metres out at the Veltins Arena.

Cordova came off the bench to score in injury time, latching onto a loose pass from Sane, rounding goalkeeper Markus Schubert and firing into an empty net.

Later, mid-table Cologne scored late goals through strikers Anthony Modeste and Jhon Cordoba, who equalised in added time, to fight back for a 2-2 draw against strugglers Fortuna Duesseldorf.

Visitors Fortuna, who are 16th which carries a two-legged relegation play-off at the end of the season, had led with an hour gone through goals by Kenan Karaman and Erik Thommy.