I Turn My Head Any Time I Walk Into The Room, BBNaija’s Beauty Tukura Says 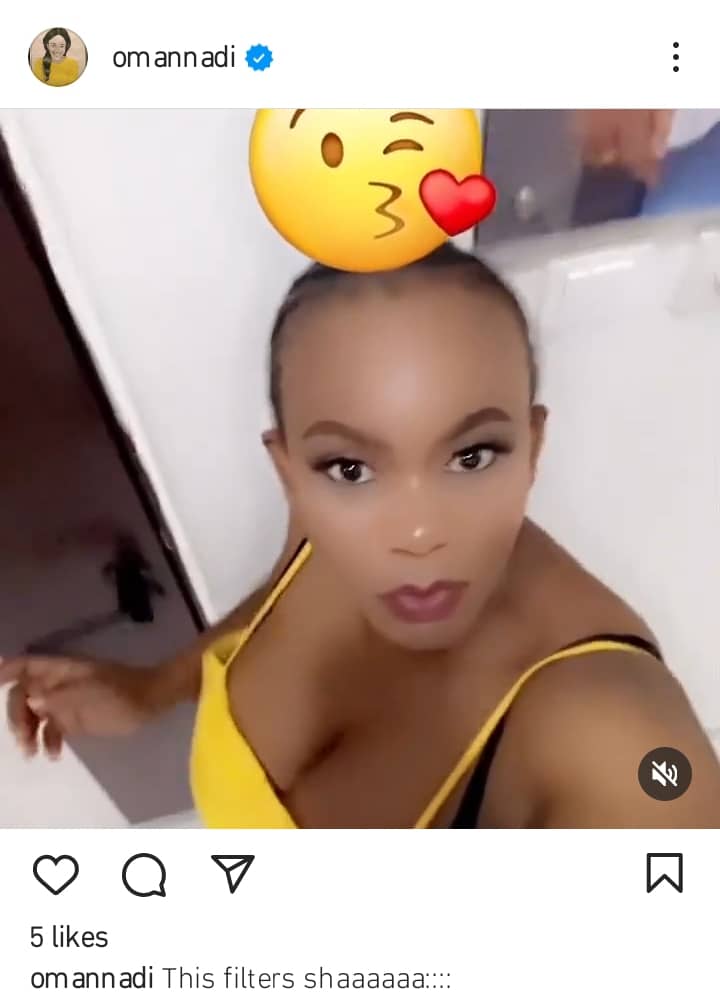 Hours after her colleague dragged her over unpaid debt, Nollywood actress, Oma Nnadi has broken her silence.

The unbothered actress and producer took to Instagram to share a video of her living her best life.

Oma Nnadi is no doubt unbothered with the draggings and call outs, despite the hateful comments on her posts.

“This filter shaaaa”, she captioned a video of her living her best life.

Earlier on, KFN reported that Oma Nnadi had been disgraced on social media over unpaid loan.

Her colleague, Chioma Okoye, claimed that Oma Nnadi had used her to collect loan from someone. However, the actress was unwilling to pay and to worsen the situation, Oma Nnadi has been using her celebrity status against her.

Chioma expressed gratitude to some of her colleagues like Anita Joseph, Queen Nwokoye, and others who tried playing intermediary between the two.

She further stated, that this has taught her to always have a written agreement before giving loans to friends.

“@omannadi you no go send me to go collect loan for you, to pay back the loan now you come dey form big madam on top! Oma you must pay o! Abeg fan make una help me call her for me b4 I start live video on how it started since November last year o! Thank you @brownigboegwu @cjmama_cafe @realanitajoseph @queennwokoye @nickson_production @boldstepsofficial20 for stepping into this matter I appreciate as the matter dine be so na online fam turn to help me out. Biko I need big platform to share the full gist please reach out to me via DM. Now I see the reason you no suppose borrow loan for a friend without written agreement. Abeg make una help me o because the person wey I collect money from don carry me go village shrine o”.

Still in the news of celebrities debt, recall that in April, just few hots after his wedding to Rita Dominic, Fidelis Anosike was called out over debt.

Also, Gideon Okeke had called out filmmaker, Frank Rajah for allegedly owing him half a million naira.

Gideon Okeke claimed that he had been quiet for over 3 years about the debt.

He further claimed that alot of influential and important personalities are aware of the debt.

Quoting Frank Rajah’s word, he stated that he questioned if people would beat him over the debt.

According to Gideon, if there was structure in Nollywood, Frank wouldn’t dare bully him or try to outsmart him.

Gideon stated that Frank is one of the horrible bosses in Nollywood but would keep things silent till he releases the film or sell it to a VOD portal. Read more here.