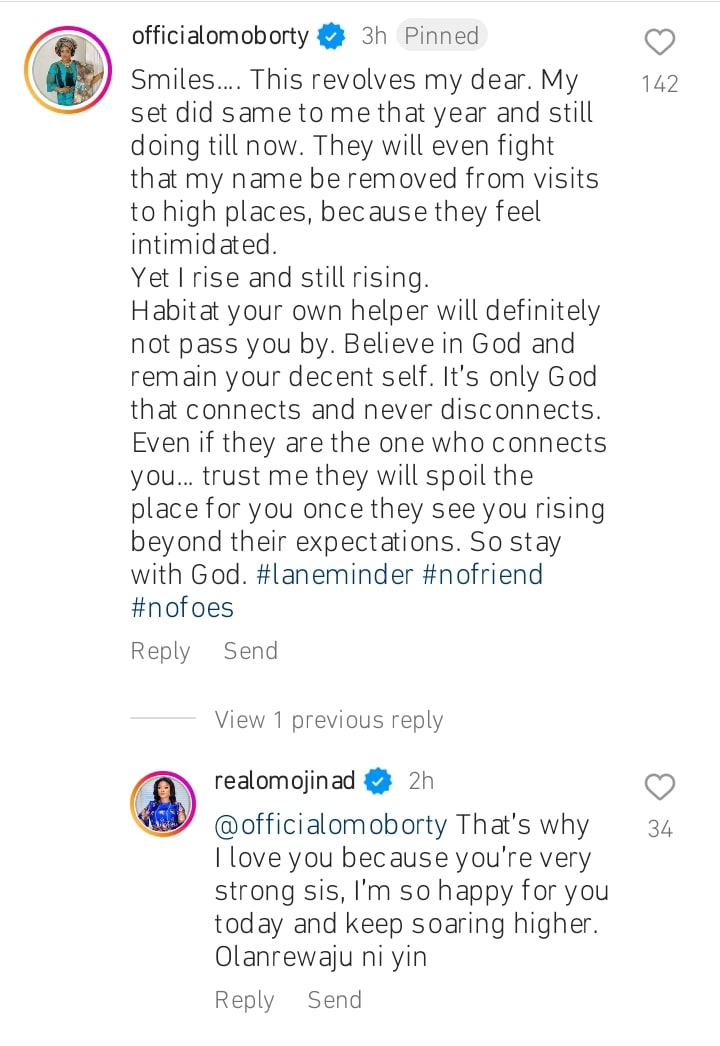 Nollywood actress, Biodun Okeowo better known as Omoborty has recounted her bitter experience in the hands of her colleagues.

While reacting to the ongoing beef between Habibat Jinad and Yetunde Bakare, Omoborty shared her story.

Taking to Habibat’s comment section, Biodun narrated her own similar experience in the hands of her colleagues.

She recounted how they did the same thing to her and fought for her name to be removed from visits to high places.

According to her, these bitter colleagues felt intimidated by her presence.

“Smiles…. This revolves my dear. My set did same to me that year and still doing till now. They will even fight that my name be removed from visits to high places, because they feel intimidated.

Yet I rise and still rising.

Habibat your own helper will definitely not pass you by. Believe in God and remain hour decent self. It’s only God that connects and never disconnects. Even if they are the one who connects you…trust me they will spoil the place for you once they see you rising beyond their expectations. So stay with God”.

Kemi Filani news recalls that the drama began when Habibat Jinad took to Instagram to plead with Yetunde to allow her live for the sake of her son.

According to Jinad, Yetunde has been badmouthing her and ruining her reputation based of false rumours.

She revealed that many of those who had declared interest in helping and supporting her, have been told not to by Bakare and others.

Calling her out, she pleaded with her to allow her live for her son’s sake and to consider her mental health.

“Pls I just want to live for the sake of my son. I am passing this information for my colleagues in the industry. I hear rumours about me in the industry, allow me live for my son.

Consider my mental health. Yetunde Bakare what you did is too much, you have begged me but that thing keeps coming back.

Lots of people want to help me, when they ask about me, you say “no go area”, you spoil my name.

Did I kill someone?”.

Yetunde Bakare hits back at Habibat

Reacting, Yetunde Bakare slammed Jinad for holding on to a misunderstanding that happened four years back.

In an Instagram post, Yetunde revealed that someone had lied against her to Jinad and she had called Jinad to set things straight.

Rather than letting go of it, Habibat was opening up old wounds and painting her in a bad light.

Yetunde Bakare, stated that for her son’s sake, she would be the bigger person between the two.

She made it clear, however, that she isn’t afraid of fights, neither does she run away from it, but for her son’s sake, she would ignore it. Read more here.