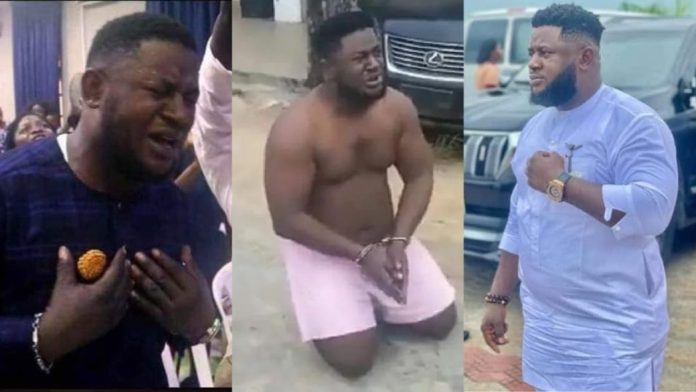 The police have arrested a so-called “big boy” from Abuja named John Lyon for allegedly being a member of a kidnapping gang that was behind several high-profile kidnappings and robberies in the state and other Niger Delta regions in 2019.

Also known as ‘Lion’, the suspect was said to be close to David Lyon, a Bayelsa politician, who he refers to as ‘Daddy’ in some of his social media posts.

David Lyon was in 2019, elected governor of Bayelsa State under the platform of the All Progressives Congress (APC) but the Supreme Courtinvalidating his election a day before he was to be sworn in as governor, after it ruled that his running mate, Degi Eremienyo Wangagra, submitted a forged certificate to the Independent National Electoral Commission.

The Supreme Court therefore mandated that the PDP candidate Douye Diri, who finished second in the poll, be handed the certificate of return and assume office as governor.

John Lyon was well-known for displaying large sums of money on social media, urging his fans to “hustle,” and inspiring Nigerian teenagers to work hard until his arrest and exposure as a suspected kidnapper and armed robbery kingpin on Saturday.

He also posted pictures of himself with police officers as his bodyguards on his way to attend an APC function, and another picture of himself in a church programme where he could be seen singing and praising God.

In addition, he used an interior design company, known as Lyon Interior Hub, in Abuja, as his main source of income and was said to be a former staff of one of the major banks in the country.

He was said to usually give millions to actors and singers, with popular musician, Patoranking, said to have once been seen with him.

His cover was however said to have blown when he was traced and nabbed by a crack police squad in Abuja on Saturday.

He was alleged to have been recently involved in the kidnap of one Danjuma, a bank staff where he and his men successfully demanded over N50 million.

In viral videos after his arrest, Lyon, handcuffed and only in boxers, is seen kneeling on the floor, weeping profusely and begging for mercy, claiming that his wife had just delivered a baby.

While being questioned, he confessed to being a kidnapper but said he only kidnapped two people.

However, a man in the video who claimed to be one of Lyon’s victims, contradicted him and insisted that he had kidnapped more than two people.

The man went on to narrate how Lyons’s gang kidnapped him and threatened to kill him if he did not part with a hefty ransom.