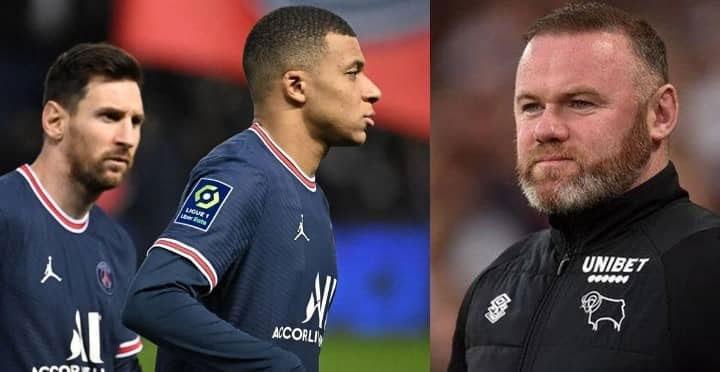 Rooney’s anger at Mbappe was revealed following the French forward’s unruly behaviour toward Neymar and Messi.

The former England striker has criticised Mbappe for pushing Messi during the Ligue 1 match between PSG and Montpellier last weekend.

The former Red Devil noted that he felt angry at the manner Mbappe, one of the stars in world football at the moment, behaved with Messi, who has currently won most Ballon d’Or.

Last weekend, PSG had an impressive 5-2 victory over their French oppositions. During that game, a feud between Neymar and Mbappe ensued which was believed to have escalated.

In PSG’s win, Mbappe who has recently renewed his contract with the Ligue 1 champions, had a fight with Neymar over a penalty. After missing from the spot in the first penalty, Mbappe wanted to take the second penalty won by him, with the Brazilian refusing to hand him over the ball.

Meanwhile, the camera caught Mbappe giving a shove to the Argentine maestro with his shoulder while going to confront Neymar. This moment of Mbappe bumping into Messi caught the eye of the fans and people are calling the 2018 FIFA World Cup winner ‘arrogant.’

While speaking about this incident, Rooney slammed the French forward and reminded him that at his age Messi had already won four Ballon d’Ors which still has not been won by the 23-year-old attacker.

Reacting to the incident, Rooney told Depar Sports, “A 22-23-year-old player throwing a shoulder at Messi… I have never seen a bigger ego than this in my life. Someone remind Mbappe that at 22 years old, Messi had four Ballon d’Ors.”

According to Italian media reports, the recent rift between Neymar and Mbappe has divided the PSG dressing room into two parts, with Sergio Ramos and Messi taking the Brazilian’s side.