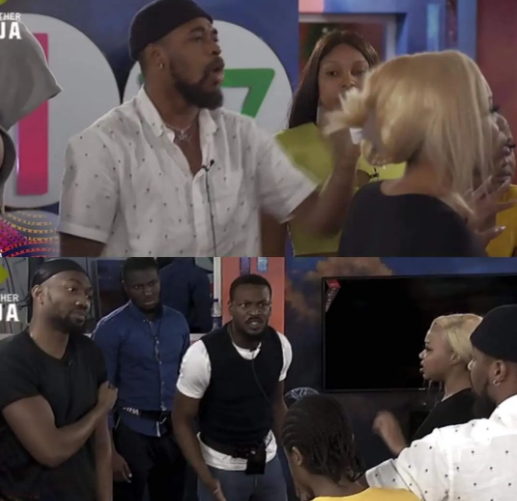 There was a major fight in the level two house on Tuesday evening after housemates Sheggz and Adekunle argued over food.

The situation escalated when Sheggz started name calling and accusing Adekunle of playing the victim in the argument sparked by the latter tagging him “not intellectual.”

On the other hand, Bella almost got in a fight with Diana and Doyin in defense of her man during the heated argument between Sheggz and Adekunle.

The problem is perceived to have started during last Sunday’s eviction show when the show host, Ebuka Obi-Uchendu, asked for Adekunle’s opinion about Sheggz and Bella’s relationship.

The housemate calmly answered Obi-Uchedu, saying he believed that the relationship might be a mere strategy.

These words didn’t sit well with Sheggz who quickly confronted him soon after the live eviction show ended.

Watch videos of the fight below: