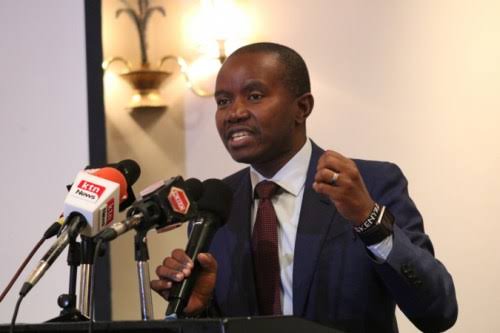 Outgoing Cabinet Secretary for Information Communication and Technology Joe Mucheru has called President William Ruto to consider retaining the State Department for ICT and Innovation Principal Secretary Jerome Ochieng because of his vast experience in the ministry.

According to the report, Mucheru claimed that Jerome has over 25 years of experience in public service and is best placed to steer the docket. Mucheru alleged that it was through the experience of Jerome that the ministry achieved milestones.

Kisumu Deputy Governor Mathews Owilo echoed Mucheru’s remarks as he described the PS as a dedicated public servant. He also noted that despite holding a divergent political opinion former President Uhuru had settled on him as the PS in the sector because of his knowledge and experience.

Jerome who has been shortlisted in the Principal Secretary position has also been recommended by immediate Siaya Governor Cornel Rasanga.

Eliud Owalo has been nominated as the CS secretary for ICT as he waits for approval from the parliamentary. President Ruto is set to appoint PS’s in the coming days to help his nominees in ensuring the ministries are steered in achieving his alleged agendas.

Content created and supplied by: Nyabwari (via Opera
News )