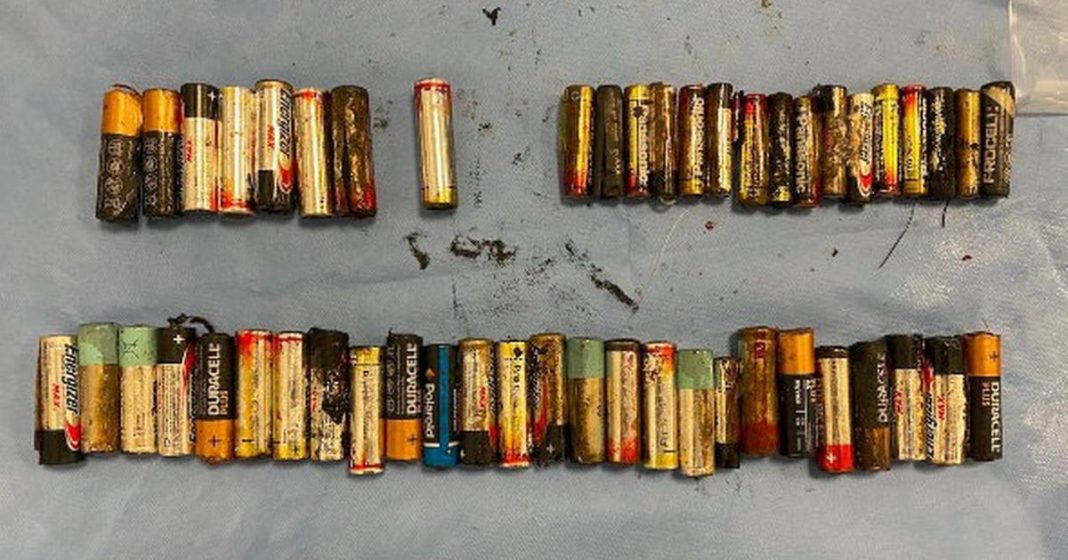 The terms “emergency” and “AAA” typically connote a roadside incident. Certain doctors in Dublin, however, are unlikely to ever associate those terms with anything but a recent surgery — during which they found dozens of batteries in a 66-year-old woman’s colon and stomach.

A report of the incident, published Thursday in the Irish Medical Journal, detailed the patient’s arrival at St. Vincent’s University Hospital, where an X-ray revealed the foreign objects in her body. Miraculously, none were obstructing her gastrointestinal tract, according to Live Science.

Doctors initially decided to wait in hopes that she would pass the batteries out of her body naturally. Though she released five AA batteries in the first week, subsequent X-rays showed that most were still stuck inside — and the woman began experiencing abdominal pain.

After realizing that her distended stomach was hanging above the pubic bone due to the weight of the batteries, surgeons cut into her abdomen and successfully removed 46 of them.

Unfortunately for all involved, four additional batteries remained trapped in the colon. As described in the report, doctors “milked” them into her rectum to remove them from her anus. This brought the total amount of batteries she ingested — both AA and AAA — to a whopping 55.

“To the best of our knowledge, this case represents the highest reported number of batteries ingested at a single point in time,” the journal article said.

While the incident certainly inspired curious bafflement, the report reminded readers that the ingestion of batteries is a serious, albeit “unusual,” method of self-harm. Its authors noted that the act can cause severe issues, including “mucosal injury, perforation, [and] obstruction.”

“The potential of cylindrical batteries to result in acute surgical emergencies should not be underestimated,” the report stated.

If you’re struggling with an eating disorder, call the National Eating Disorder Association hotline at 1-800-931-2237.

If you or someone you know needs help, dial 988 or call 1-800-273-8255 for the National Suicide Prevention Lifeline. You can also get support via text by visiting suicidepreventionlifeline.org/chat. Outside of the U.S., please visit the International Association for Suicide Prevention for a database of resources.