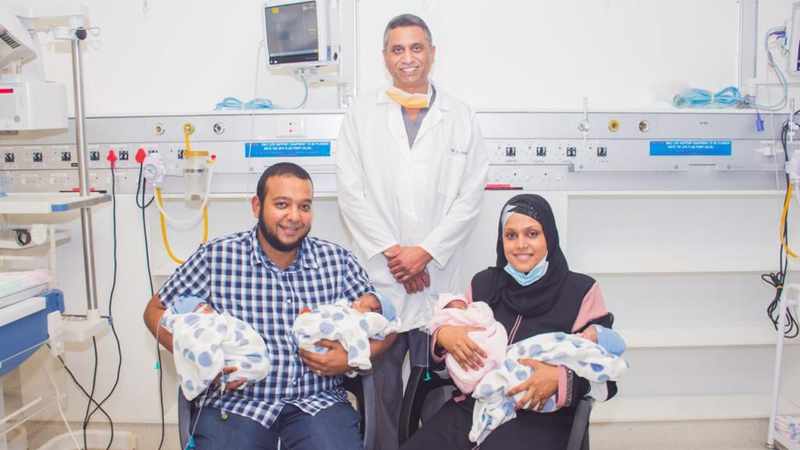 Durban – First-time parents Wasif Hussein and wife Ariffa are looking forward to celebrating Father’s Day this Sunday with their set of quadruplets who were born at St Augustine’s Hospital in May.

The couple who are married for five years told IOL they had been trying to conceive naturally for four years.

“We then decided to seek medical advice from Dr Sagie Naidu and after fertility treatment, I fell pregnant in October 2020.”

Ariffa said hearing the news that she was pregnant, not with one but four babies, was absolutely thrilling.

“The pregnancy went by so fast. I had little to no complications.

“At every doctor’s appointment when asked how I felt, I would say I was okay, because I really was.”

The quads comprise of three sons and one daughter who were born at 31 weeks via c-section on May 25.

The babies are still in hospital but will be going home just in time for Father’s Day on Sunday.

Each baby weighed between 1,4 and 1,9 kilograms at birth.

“They have gained weight so well, I go every day to the hospital to see them and spend time with them and I cannot wait to take them home.”

Hussein said she had plenty of assistance from their family.

“So many people want to help, but with Covid-19, we have to be careful for now.”

She said the quads have been named Humzah, Khalid, Moinudeen and Haadiyah.

Wasif said: “This is definitely a proud moment and a great blessing from God Almighty to be a father. No words can describe the feeling, however, I am sure all of the other father’s out there can relate.”

“When we first found out the patient was expecting multiple pregnancies we ensured that a good team was in place to be on standby for an emergency at any time.”

He said the patient who was cooperative throughout the pregnancy went into premature labour and went into labour at 31 weeks.

“When this happened, the team was ready. I have to place on record the good work of the clinicians, paediatricians and the neonatal ICU.”

Naidu confirmed the babies are all healthy and will be going home soon.