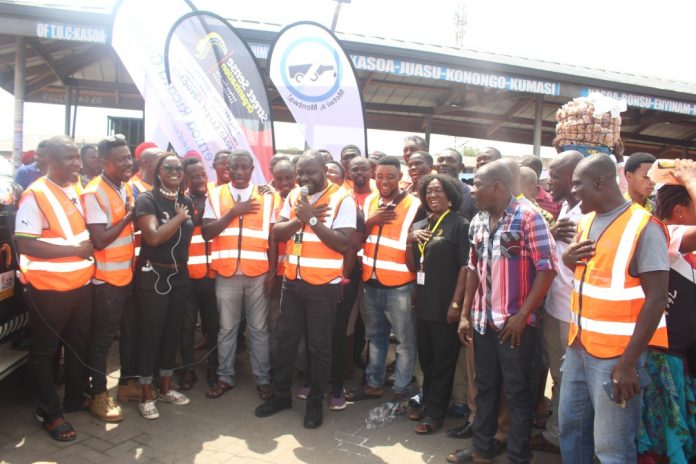 Street Sense Organisation, a road safety campaigner has partnered Pernod Ricard Ghana to educate drivers on the dangers of drinking alcohol before driving.

The initiative started last year and had a theme, “Mitwi a, Mentwa”, literally meaning “When l drink, I will not drive.”

The campaign aims to reduce the incidence of drink-driving through education and reminders on the risks and dangers that drink-driving poses to both drivers, pedestrians, and other road users.

Mrs Gloria Laryea, a Member of Trustees of Board for SSO, said the event also formed part of their annual education and awareness creation during and after festivities.

She said: “We all know that during festivities, drivers rush to their destinations and return for more passengers, causing so much havoc in terms of road accidents.

“Over speeding, wrong over taking and alcohol abuse are mostly the root causes of carnages on our road,” she said and appealed to the drivers to adhere to road traffic rules and regulations to save more lives.

Mrs Laryea said this year, the records had shown a decrease in road accidents and urged the drivers to work hard to sustain the success chalked.

Ms Eunice Osei-Tutu, Corporate Relations Manager of Pernod Ricard Ghana, said: “We are producers of wines and spirits, but we are saying that there are times to drink but not when we are driving.”

She said road accidents had left many orphans and had caused socio-economic lost to the country, adding, “most at times accident victims fall within the productive age group, leaving their family members, some of whom drop out of school.”

She, therefore, urged the drivers to pledge to their clients that they would not drink while driving to ensure accident free during and after the festivities.

Muntala Yahaya, the First Trustee, Kumasi-Nkawkaw GPRTU, Kasoa Branch, thanked the organizers and pledged their resolve to advise their members to maintain their accident-free record for the past years.

“The Executives always meet the drivers and advise them on how to conduct themselves on the road to ensure sanity and safety,” he added.

The drivers were given branded reflective jackets, stickers, and air refreshers to remind them of their responsibilities to save lives on the road.

The 10-day campaign, which started from the Neoplan and Obra Spot Stations at Kwame Nkrumah Circle, would continue to Kaneshie, Ashiaman, Lapaz, Amasaman, Nsawam, Tudu and Accra-Tema Lorry stations.