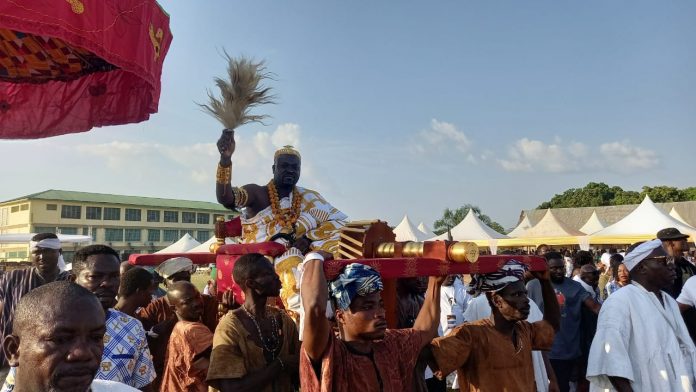 “An efficient local land administration will no doubt bring order and discipline into our physical development space and trigger a departure from the chaotic manner in which we put up houses, buildings and many other physical structures,” he said.

Togbega Gabusu, at his enstoolment and coronation, said the Gbi Traditional Area, with Hohoe as its capital, had fast assumed a cosmopolitan status, which called for a new paradigm shift in terms of traditional land administration.

He said the Gabusu Stool remained the channel through which the powers of the ancestors guided and protected the Gbi Kingdom, but promised to carry out the reforms to be adequately responsive to the people.

“The Traditional Area shall crave the utmost support of the Municipal Assembly to initiate a cultural renaissance that will focus on tourism promotion through arts and crafts,” he said.

To drive the tourism initiative, they would establish special purpose vehicles (SPVs) to introduce the Hohoe Cultural Festival where talents of the people would be exhibited, Tobgega Gabusu said.

The Traditional Council would build partnerships and seek international assistance for the restoration and revival of the creative and artistic talents of the Gbis.

The Paramount Chief called for a better environmental hygiene and sanitation, reverse the massive deforestation and degradation of the lands and forests, and action to protect River Dayi, the major source of water in the area.

He acknowledged the work being done by the “Save Dayi Project” to re-forest the banks of the river while calling on all to lend a hand to ensure the success of the project.

The Traditional Council would liaise with the Municipal Chief Executive to provide employment opportunities for the youth through government programmes such as the “You-Start” and other youth entrepreneurship programmes to create jobs, he said.

Togbega Gabusu called on the Gbis in the Diaspora to assist with investments in the Traditional area to create employment for the youth.

He advised the youth to take advantage of the vast land and venture into agriculture, as agribusiness had proven to be rewarding.

He urged them to be more disciplined and assimilate the values of respect, hard work, honesty and dedication to any endeavour, while calling for responsible parenting.

He expressed gratitude to all, especially the chiefs and queens, for making the occasion a success.

Mr John-Peter Amewu, the Memer of Parliament for Hohoe, and Minister of Railway Development, on behalf of President Akufo-Addo, commended Togbega Gabusu on his enstoolment and coronation.

He assured the Chief and the people of Gbi of his continued support to make the area an enviable one.

Mr Kwabena Bonsu Fordwor,  the Chief Executive Officer, Ghana Integrated Iron and Steel Development Corporation, in a goodwill message, congratulated Togbega Gabusu on his elevation to the eminent position while wishing him a long, fruitful and successful reign.